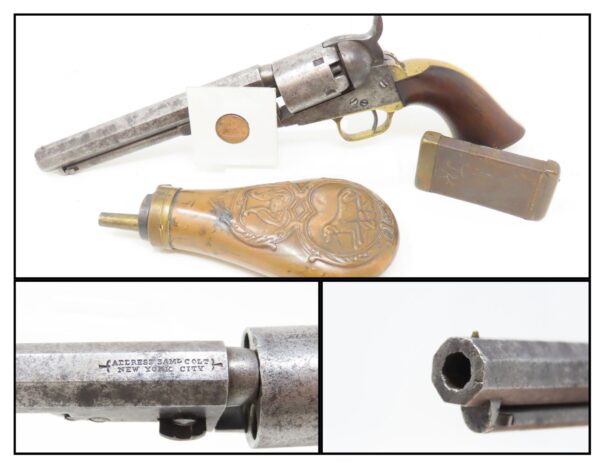 Here we present an antique percussion Colt Model 1849 Pocket Revolver, made in 1853 in Hartford, Connecticut. The Model 1849 Pocket, the replacement for the Baby Dragoon, was the most widely produced of any Colt percussion pistol. Nearly 340,000 were manufactured during its 23-year production run that ended in 1873. Over 280,000 of these were produced by Colt’s factory at Hartford by the end of the American Civil War in 1865. These were very popular and saw a lot of use on the battlefield, on the home front and in the West. These were some of the smallest, handiest pocket revolvers of the time.

This example has “3 VA” stamped into the bottom of the right grip panel’s skirt and “TK” on the left. Without a doubt, many Colt Model 1849s were used during the Civil War. Could this have been a revolver used by the 3rd Virginia Regiment during the war? The 3rd Virginia Volunteer Infantry Regiment was an infantry regiment raised in Virginia for service in the Confederate States Army during the American Civil War. It fought mostly with the Army of Northern Virginia. Though we’ll never know for sure either way, it would make for some great stories when you’re showing off this little prize of a percussion revolver!

The overall condition is good. Strong action. The bore is dim with good rifling. Solid grip showing handling. This example has retained most of the wagon robbery cylinder scene. Numbers match. The flask in the matchbox are in good condition. The penny is quite worn. The matchbox is also hand engraved with “TK” and 3 VA”. A great historical display!