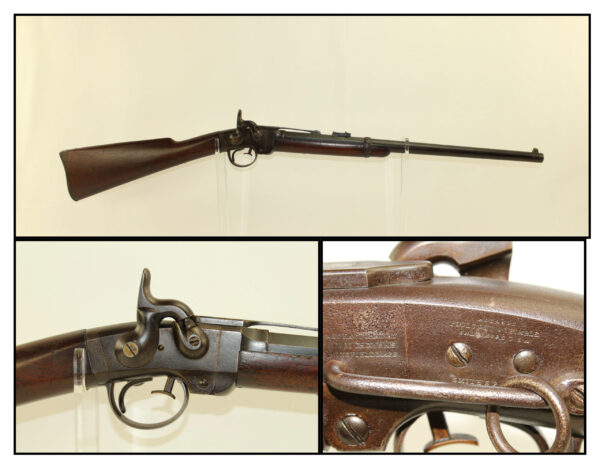 Here we present an antique Smith’s Patent Carbine, made circa 1863 by the American Machine Works in Springfield, Massachusetts. About 30,362 of these carbines were made and almost all of them were used in the Union cavalry of the American Civil War. The designer was Dr. Gilbert Smith Buttermilk Falls, New York. Along with American Machine Works, Massachusetts Arms Co. and the American Arms Company also manufactured the Smith Carbine between 1861-1865. Smith’s design was one of the more popular cavalry carbines during the war as his design featured a simple break open action, providing a single shot, utilizing a cartridge made of rubber. While many different cartridges were in use simultaneously during the war—which must have been a logistical nightmare—the rubber cartridge was both a nuisance to the shooter who had to get the hot gummy thing out of the chamber once fired, as well as to the ammunition manufacturer, who had to acquire rubber from distant places. In place of rubber, many other materials were also tried.

The over condition is very good. 70% of the original blue finish remains, turning dark with age. The markings are clear. The walnut stock bears a clear cartouche and is smooth. There is a hairline, barely perceptible crack on the right side of the wrist and the stock is solid otherwise. The bore is shiny bright with sharp rifling. The action is excellent.