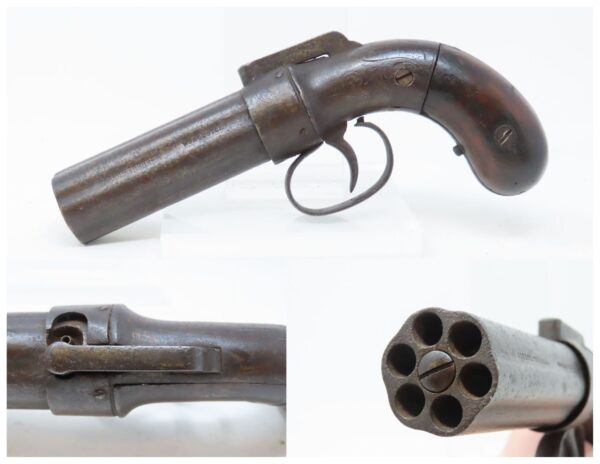 Here we present an antique Allen & Thurber Bar Hammer 6-shot Percussion Pepperbox pistol made circa 1847 to 1854 in Worcester, Massachusetts.  Only six-barrel pepperbox pistols were produced during the Grafton and Norwich periods (1837–1847), and all had smooth barrel external contours until the later Worchester and Allen and Wheelock period, when fluted barrels became the norm. Though this is a six shot, it was during the Worchester period that the five-shot pepperbox was introduced. Percussion nipples were integrated to the barrels. Made with a bar hammer and standard trigger, models have been encountered with or without an integral nipple shield. While simplifying shooting (no manual cocking of the hammer), the bar hammer did preclude the inclusion of usable sights. However, this early example of a double-action pistol must have been quite a selling point. As these were considered “point and shoot” short range defensive weapons or “belly guns”, the market did not seem to object to the limitation of not having sights.

Ethan Allen was already a prolific inventor and successful businessman in the 1830s when he came up with this design. This percussion, six-shot, double-action pocket revolver was a very popular pistol that was produced in Worcester, Massachusetts. It’s a 31-caliber pepperbox with a revolving screw off fluted barrel and has factory engravings in a floral motif executed on both sides of the frame. Made from 1847-1854, these pistols enjoyed even greater popularity than Sam Colt’s first pistol. The history that these pistols enjoyed over the years is astounding: the Seminole Wars, Gold Rush, Mexican War and American Civil War. These guns are true relics of American history.

The overall condition is fair. Deep, dark, weathered patina throughout. The action (hammer/trigger) are strong, however, the barrel cluster does not revolve. The bores are dark and dirty. The back of the trigger guard bow has popped out. Grips are in good shape.