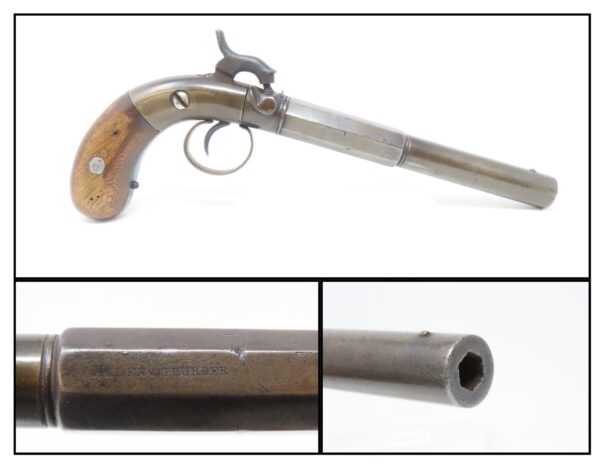 Here we present an antique Allen & Thurber Center Bar Hammer Percussion Single Shot Pistol in .36 Caliber made circa 1842-54 in Worcester, Massachusetts. This is one of only several thousand made and designed to be a very simple and slender conceal and carry, self-defense pistol in the turbulent 19th Century.

Ethan Allen was a true family man, investing and partnering with a nephew in a New York sporting goods retailer, hiring another brother-in-law, Thomas Wheelock, who was eventually made a partner, and similarly hiring and later making partner his two sons-in-law Sullivan Forehand and Henry Wadsworth. Because of these practices, his business was very successful. This company was founded by Ethan Allen in early 1800s and soon became a prolific gun-making firm that evolved from Ethan Allen to Allen & Thurber, as well as the Allen & Wheelock Company. It was located in Norwich, Connecticut and Worchester, Massachusetts, as well as Grafton. Eventually it became the Forehand & Wadsworth Company in 1871, after the death of Ethan Allen.

The overall condition is good+. Strong action. Good bore. Both grips are in good shape with an expected level of wear. Here is a handy percussion self defense pistol in great shape for the collection!