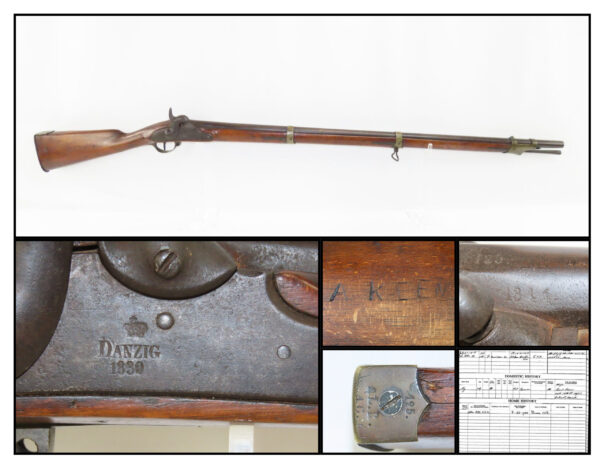 Here we present an antique Danzig Model 1809 Percussion Musket, manufactured by the Danzig Arsenal in 1820. Danzig is presently a city in Poland but was an important region in Prussia at the time this musket was made. The Model 1809 was originally made in the flintlock format, with later production shifting to the more modern and reliable percussion firing system. This musket would have been used in Prussian conflicts during the 1840s and 50s, including the Egyptian-Ottoman War, the Greater Poland Uprising, the Revolutions of 1848, and the First Schleswig War, before being sold to the United States government in the first years of the American Civil War. Though thoroughly obsolete, both the Union and the Confederacy were desperate for small arms as the South had little capability to make their own and the North had to scramble to ramp up their own production.

Ayer Keen mustered into “H” Company of the Ohio 35th Infantry on August 26, 1861 as a private and remained in the Union Army until November 19, 1862 when he was discharged for an unknown disability, like related to an injury sustained during battle. The 35th was involved in many battles throughout the Civil War, including the Battle of Chickamauga and the Siege of Atlanta. Many of these muskets went to the state of Ohio.

The overall condition is good. The action is strong. The bore is smooth and dark. The stock is solid and remains in good shape. “125” is engraved atop the barrel. “125/4.LB./4C.” is stamped on the buttplate tang. On the right side of the buttstock “A. KEEN” has been carved out. “1844” can be faintly seen on the right side of the barrel. “DANZIG/1830” is engraved on the lock. Original arsenal & acceptance markings remain throughout. Here is a great conversion musket with a lot of history to collect and display!