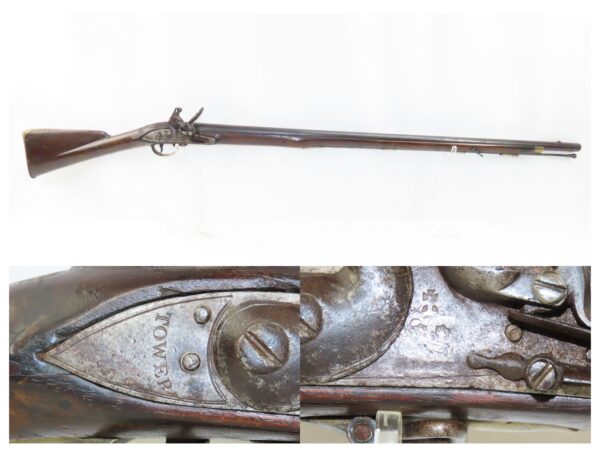 Here we present an antique British Brown Bess Flintlock Musket with “79th REGT” markings on the top of the barrel, made circa the late-18th Century. This indicates the 79th Regiment of Foot, the Queen’s Own Cameron Highlanders, also known as the Cameron Highlanders or the Cameronian Vounteers. This regiment was raised in 1793 in the Scottish Highlands at Fort William from Clan Cameron from which the regiment gets its name.

This unit fought the French during the French Revolutionary Wars as well as the Napoleonic Wars. In 1794 the 79th was sent to Flanders and saw the end of the Flanders Campaign (April 1792- June 1795) under the Duke of York. After this the regiment was sent to the West Indies for a two-year stint. 1799 found the 79th fighting the French again at Alkmaar in the Netherlands during the War of the Second Coalition (1798-1802). 1800 saw the 79th fighting the Spanish in an effort to capture the naval base in Ferrol (during the Anglo-Spanish War that was a part of the Coalition Wars). March of 1801 found the regiment in Egypt at the Battle of Abukir where they defeated the French and forced a surrender, securing a major route to Indian trade.

Napoleon would abdicate but return from exile for one final stand about a year later. Once again, the 79th would be there to fight the French forces, this time in Belgium. The regiment fought under the Duke of Wellington at the Battle of Quatre Bras (June 16) and at Waterloo (June 18) of 1815, suffering massive casualties in their efforts: 103 killed and 353 wounded in these two preeminent battles of the Napoleonic Wars. The 79th Regiment was mentioned in the Duke of Wellington’s famous Dispatch (his after-action report recounting how the French forces were defeated; written the day after the Battle of Waterloo), one of only 4 regiments specifically mentioned in the document:

We maintained our position also, and completely defeated and repulsed all the enemy’s attempts to get possession of it. The enemy repeatedly attacked us with a large body of infantry and cavalry, supported by a numerous and powerful artillery. He made several charges with the cavalry upon our infantry, but all were repulsed in the steadiest manner.

In this affair, His Royal Highness the Prince of Orange, the Duke of Brunswick, and Lieut. General Sir Thomas Picton, and Major Generals Sir James Kempt and Sir Denis Pack, who were engaged from the commencement of the enemy’s attack, highly distinguished themselves, as well as Lieut. General Charles Baron Alten, Major General Sir C. Halkett, Lieut. General Cooke, and Major Generals Maitland and Byng, as they successively arrived. The troops of the 5th division, and those of the Brunswick corps, were long and severely engaged, and conducted themselves with the utmost gallantry. I must particularly mention the 28th, 42nd, 79th, and 92nd regiments, and the battalion of Hanoverians.

This musket looks fitting for a musket that has been at the Battle of Waterloo. The exterior has a dark, weathered patina. There are Board of Ordnance stamps on the top of the barrel and a small spangled “W” on the left side of the breach end. There is a storekeeper’s marking on the left side of the butt stock. The lock plate bears a faint royal cipher and is “TOWER” marked on the tail of the lock. The frizzen was so worn that a new sheet of iron was brazed to the old face. The action will hold in the half-cocked position and even the full-cock position but is not quite functional any longer. The bore is smooth and dark and you can see the thinness of the muzzle area. The stock has been repaired around the lock area long ago and it blends nicely with the surrounding wood. A very well-used musket indeed, and a lovely piece of history that was used by the British during this epoch dominated by the French.