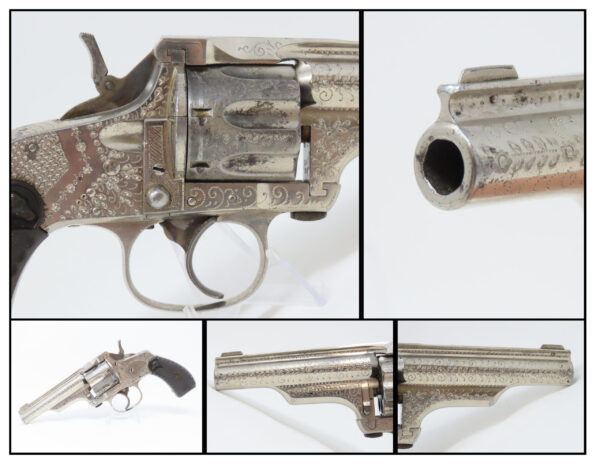 Here we present an antique Merwin, Hulbert & Company 7-Shot Double Action Revolver in .32 S&W, made circa the 1880s exclusively by Hopkins & Allen in Norwich, Connecticut. Total production is estimated to be only a few thousand, with .32 caliber being rare, especially in this configuration, which features the slightly larger frame size that allowed the 7-shot .32 caliber cylinder to be utilized which enhanced firepower. This revolver was factory engraved which consists of floral designs throughout as well as feature of a stag on the left side plate. The left side of the frame is stamped “32 CAL 7 SHOT”.

A great feature of these Merwin Hulbert Revolvers was the method of ejection. Loading was achieved by placing the hammer at half-cock and sliding down the loading gate to single feed cartridges. If one wanted to unload the gun, they could simply push the latch back on the bottom of the gun, twist the barrel and cylinder assembly and pull forward. Only the empty brass would come out as the space created was shorter than a loaded cartridge, enabling the shooter to top off his gun and keep rounds available. An ingenious method was designed to achieve this that included a machined cut on the cylinder axis pin and a ledge on the breech face that kept the cartridge rims underneath. This system was also advantageous for forcefully removing stuck cartridges, providing lots of mechanical advantage.

In addition to the unique design and the increased firepower this revolver has to offer, it also has a folding hammer spur. This is a feature unique to Merwin Hulbert as well as Hopkins & Allen revolvers of the period. The folding spur allowed this revolver to be less snaggy on the draw and still allowed the user to put the hammer in the half-cocked position for loading and unloading.

These revolvers are considered today to be some of the best made of the late 19th Century and the Wild West, even better in some minds than similar Colts and Smith & Wesson. These pistols certainly tended to have different, very well-thought features than their competition, and they were extremely well-made. In fact, this very revolver is pictured in Art Phelps’ “The Story of Merwin, Hulbert & Co. Firearms” on page 41! A very small run of these books was self-published in 1991 (therefore rare) and the work itself has been described as a “labor of love”.

The overall condition is very fine. The action is excellent. The bore is bright. The engraving is sharp and the nickel finish bright. Excellent case colors. The markings are clear. The grips picture a dog’s head on either side and are in fine condition. A jewel of a Merwin Hulbert!