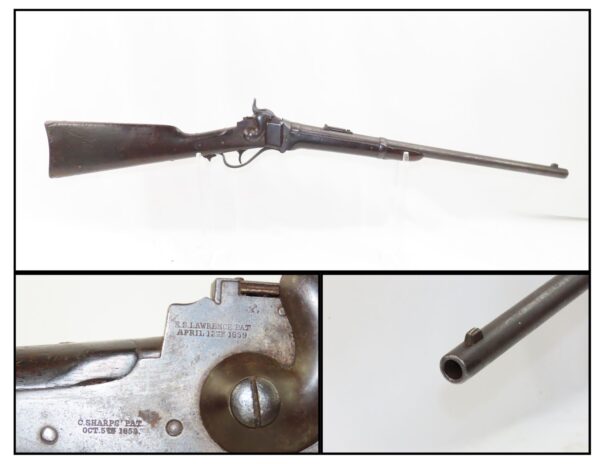 Here we present an antique Sharps New Model 1859 Carbine, made circa 1859-63, then converted to .50-70 Govt circa 1867 for use in the West by the federal government. Over 100,000 Sharps rifles and carbines were purchased and used by the federal government during the American Civil War. In 1867, the Ordnance Department contracted with the Sharps Rifle Company for conversion of over 31,000 Sharps percussion carbines to the .50-70 breech loading configuration. These carbines were issued to the regular cavalry regiments on the western frontier and remained in service until they were replaced by the Springfield Model 1873 Trapdoor Carbine. This is one of the iconic carbines of Western lore, as they were handy, accurate, powerful and reliable guns, and many went to the Western Frontier as trappers, explorers and settlers moved that way. They experienced some of the most exciting times in American history during the Indian Wars, the settling of the West, and the connecting of the coasts with the railroad.

The overall condition is very good. Strong action. Bright bore with nice rifling. The walnut stock is dark and well-used and remains solid. Remnants of a cartouche remain on the left wrist. Visible lettering remains sharp. This is a great example of a cavalry carbine that was used during both the Civil War and the Indian Wars!