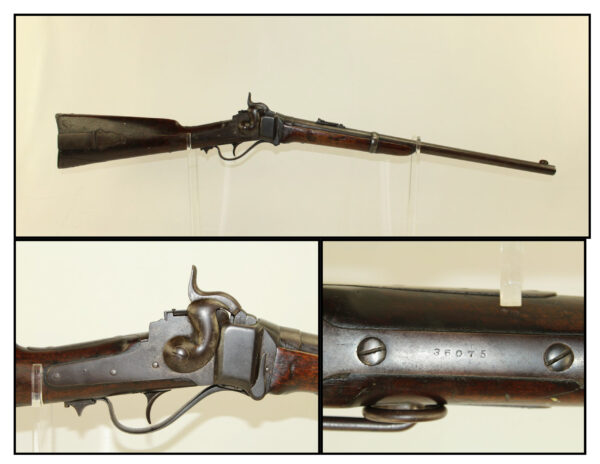 Here we present an antique Sharps New Model 1863 Cavalry Carbine, made circa 1863 in Hartford, Connecticut. There is a reason the good name of Sharps has lasted to the current day, reaching nearly legendary status. Those made prior to and during the American Civil War, from 1861-1865, were popular with the troops. They were handy, accurate, powerful and reliable guns, and many went to the Western Frontier as trappers, explorers and settlers moved that way.

This example was originally produced in the percussion format and used in the Civil War. After the war, in 1867, the U.S. Government paid Sharps Rifle Manufacturing Co. to update and convert about 31,000 of these to metallic cartridge for the military. This is one of the iconic carbines of Civil War and Western lore.

This one has many of the hallmarks of a beloved carbine that rode the dusty trails long after the American Civil War during which it was produced. It was converted from the percussion firing system to metallic cartridge .50-70 Govt shortly after the conflict. The front sight has been replaced with half of an old penny. The stock experienced a fracture at the toe and was fixed in the field long ago. The right side of the stock bears the initials “WHL”. The lock is marked “C. SHARPS PAT./SEPT. 12TH 1848”. The barrel is marked “NEW MODEL 1863”.

The overall condition is good. The iron parts have a gray patina. The markings are clear. The walnut stock has a period field repair. The bore is in very good condition, clean with strong rifling. The action is excellent. Here is a very cool old Sharps carbine that would be perfect for display above the fireplace.