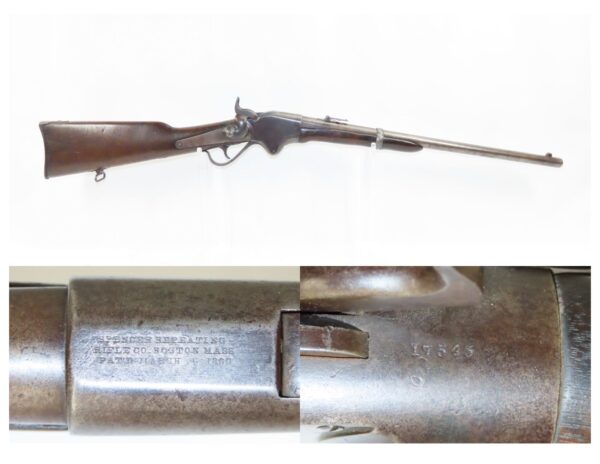 Here we present an antique Spencer Repeating Rifle Co. Army Model Saddle Ring Carbine, made circa 1864-1865 in Boston, Massachusetts, during the Civil War. These lever-operated, breech-loading rifles were marvels of the time and had a lasting impact on how war was to be fought in the future. Though their service life in the U.S. military was relatively short, the Spencer story includes Christopher Spencer, the inventor of the rifle, demonstrating and shooting with President Abraham Lincoln, who gave his full endorsement of the piece. Supposedly, during the battle at Gettysburg, a captured Rebel that day said one could “load in the morning and fire all day!” This was due to the Spencer’s most endearing quality: a 7-round magazine tube in the butt of the gun. This gave the shooter phenomenal firepower in a day when most soldiers were muzzle-loading single shots or even singly loading their breech-loading carbines. This is one of the iconic carbines of the Civil War and Western Frontier.

U.S. Military Carbines from the Civil War and the Indian Campaigns to the Spanish-American War and Philippine Insurrection by John D. McAulay (pages 105-106) documents this exact carbine as issued to Private Egbert O. Dickinson of Company “C” of the 4th Michigan Cavalry in May of 1865. This is the unit, led by Union General James H. Wilson, that captured Confederate President Jefferson Davis with his wife and entourage near Irwinville, Georgia.

On April 2, 1865, with the Confederate defeat at Petersburg, Virginia imminent, General Robert E. Lee informed President Davis that he could no longer protect Richmond and advised the Confederate government to evacuate its capital. Davis and his cabinet fled to Danville, Virginia. With Lee’s surrender of his massive army on April 9, 1865, the Civil War effectively ended. During the next few weeks, the remaining Confederate armies surrendered one by one. Davis was devastated by the fall of the Confederacy. Refusing to admit defeat, he hoped to flee to a sympathetic foreign nation such as Britain or France and was weighing the merits of forming a government in exile when he was intercepted and arrested on May 10th by the 4th Michigan Cavalry. Jefferson Davis was imprisoned for two years after he was indicted for treason but was never tried. The Federal Government feared that Davis would be able to prove to a jury that the Southern Secession was legal. In May of 1867 Jefferson Davis was released on bail, with several wealthy Northerners helping him pay for his freedom. Below is an account of what took place and who was captured in Davis’s party that early morning.

m., Lieut.-Col. Pritchard, with the effective force of the

regiment, 435 men and 21 officers, moved from camp on the Fort

Valley road in a coutheast direction, following it for four miles, and

from thence on the Hawkinsville road. At might halted and hour for

rest, then pushed forward as rapidly as possible till 10 a. m. on the 8th,

when the command halted to feed and rest, which occupied until 2 p.

m., when the march was resumed. Arrived at Hawkinsville, Ga., at 5

o’clock, where it was expected supplies would be found sufficient for

the command, but there were none. A detachment of the Seventy-second

Indiana (mounted) Infantry occupied the place, and were also picketing

the Ocmulgee River. Taking the road southward toward Abbeville, Ga.,

the command marched rapidly about four miles and encamped. The

subsequently seen. During the night it stormed very hard, and during the

morning the roads were found in good condition for marching, except

here and there wherewith swollen streams ran across the road. The

command moved out at 5 a. m., marched as rapidly as possible, arriving

at Abbeville at 2 p. m. Here Col. Harnden, commanding a

detachment of the First Wisconsin Cavalry, was met, who informed

Col. Pritchard that he had been in pursuit of a train of several

wagons and ambulances belonging to Mr. Jefferson Davis and family for

several days. It had crossed the Ocmulgee River

at Brown’s Ferry, near Abbeville, the previous night, and going into

camp remained till 4 a. m., then took the road to Irwinville, Ga., in the

direction of which place Col. Harnden moved with his detachment.

Col. Pritchard did not them intend taking up the pursuit, but

obtaining information of a road about twelve miles below which led

direct to Irwinville, he determined to follow up, and if possible intercept

the train and party, and if they should attempt to take the other road, to

arrive at Irwinville in advance of them. Taking the best mounted portion

of the regiment, 145 men and eight officers (leaving the balance under

command of Capt. Hathaway, with instructions to picket all the ferries

would permit), moved rapidly, and about dark reached Wilcox’s Mills,

from whence after feeding he took the direct road to irwinville, and over

rapidly over a road which had been little traveled, and in some places

could hardly be discovered.

For fifteen miles not a house was seen nor a cultivated field; it was a

vast pine forest. Arrived at Irwinville about 2 a. m. on the 10th instant.

Not a sound was heard, and nothing indicated that a train or any troops

had passed that way. By inquiring at once or two places it was learned

that there was a camp about a mile from town on the Abbeville road.

represented themselves to be Texas and Mississippi troops. Nothing

camp. Finding a negro who knew where the camp was, Col.

Pritchard moved forward toward it very cautiously, not knowing but

what the camp might be that of the First Wisconsin Cavalry, under

Col. Harnden. Arriving in the vicinity of the camp, a detachment of

was sent around by the left flank to a position in its rear, when the

command would advance and surround the camp. At daylight everything

was complete and the command advanced rapidly and found the camp

to be that of those whom it was in pursuit of. They were completely

surprised and captured. The detachment under Lieut. Purinton in the

Abbeville, and immediately after the capture of it a force was espied

approaching, which, when it arrived in proper distance, he halted and

challenged. One of the advance party answered “friends,” but instead of

halting turned back, and, in consequence, a sharp engagement took place

with what was afterward ascertained to be the First Wisconsin Cavalry.

We had 2 men killed and 1 officer wounded; 3 of the First Wisconsin

were wounded. The following are the names of the killed and wounded

in this regiment and a list of prisoners captured: First Lieut. H. S.

with him, consisted of Mrs. Davis with four little children, Miss

returned through Abbeville and Hawkinsville, arriving here at 3 p. m.

I am, respectfully, your obedient servant,

Corps, Military Division of the Mississippi.

The overall condition is good+. Strong action. Good bore for age with strong rifling. Solid stock with signs of use. There is some chipping on both sides of the fore end at the frame and the butt stock is a bit shy to the butt plate’s toe.