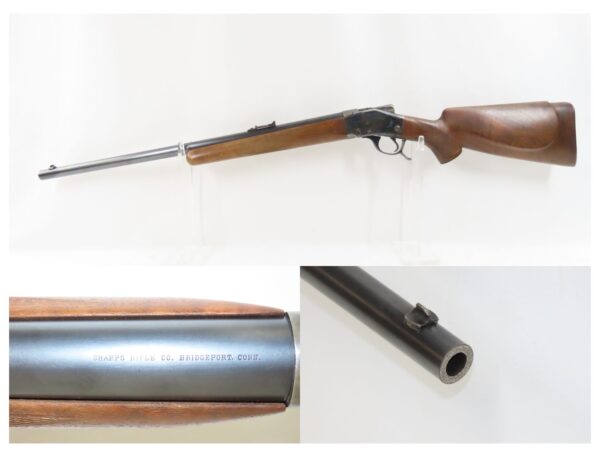 Here we present an antique Sharps Model 1878 Borchardt Single Shot Rifle, manufactured between 1878 and 1881 in Hartford, Connecticut. The Sharps-Borchardt Model 1878 is a single shot hammerless falling block action rifle designed by Hugo Borchardt and made by the Sharps Rifle Manufacturing Company. It closely resembles older Sharps Rifles but has a firing mechanism that uses a hammerless striker rather than a hammer and firing pin like the old Sharps Rifles. This hammerless dropping-block breech-loader was based on a patent granted to Hugo Borchardt in 1877. It was the last of the Sharps single-shot rifles. According to company records 8,700 rifles were made in all models that included the Carbine, Military, Short Range, Mid-Range, Long Range, Hunter, Business, Sporting, and Express from 1877 until the Sharps Rifle Co. closed down in 1881. Even with its lack of commercial success, the Sharps-Borchardt is admired for its strength and accuracy and is considered one of the strongest, if not the strongest, rifle action ever built before the end of the 19th century.

This one was a US inspected piece that was surplussed at some point and customized as you see it now. The furniture was replaced, the barrel shortened, new sights added, and the receiver case colored. This is a one-of-a-kind little rifle that is substantial, but also substantially handier than its original configuration. The lever has also been reprofiled and the safety catch behind the trigger deleted.

The overall condition is very good. The action is excellent. The bore is shiny bright with nice rifling. The stock is smooth and solid with nice hand-checkering. There is a tiny chip in the bottom of the forearm just forward of the mounting hardware.