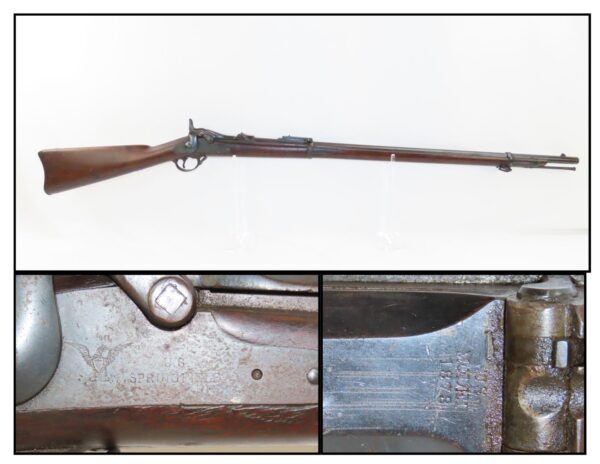 Here we present an antique U.S. Springfield Model 1884 Trapdoor Rifle, made by the Springfield Armory. This rifle was manufactured in 1887, around the Indian the end of the Indian Wars and just before the Wounded Knee massacre. After the Civil War, the War Department wanted a breech-loading rifle. To be specific, it wanted a breech-loading rifle that would chamber a self-primed, metallic cartridge. Amazingly, despite the adoption of the ill-fated Model 1882 Chaffee-Reese Bolt Action Magazine Rifle, new models of trapdoor rifles continued to be produced and used all the way through the mid-1890s, until finally, the Krag-Jorgensen was adopted.

The U.S. continued to see unrest and conflict with the displaced Native Americans during this time, including the Wounded Knee Massacre on December 29th, 1890. Trapdoors continued to see use all the way through the Spanish American War.

This piece features a faint cartouche on the left side of the stock as well as a circled “P” on the bottom of the wrist. The butt plate tang is marked “US”.

The overall condition is very good. Original blue finish turning plum. The action is strong and tight. The bore is bright with sharp rifling. The stock is smooth and solid. A great example of a trapdoor rifle from the time of the American Frontier, great for the collection or display!