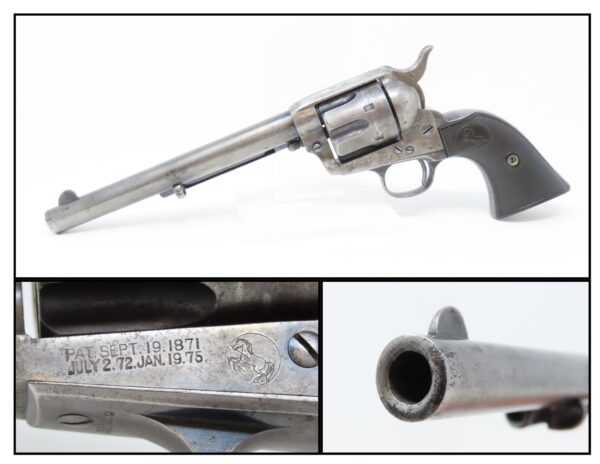 Here we present an antique Colt Single Action Army Revolver, manufactured in 1898 in Hartford, Connecticut. The Colt “Peacemaker” was introduced in 1873 and has become one of the most iconic firearms in all of history, thanks to its widespread use by the U.S. military, civilians and, more recently, in Western films. Total production numbers for the Colt Single Action Army reached 357,859. The production numbers for the .38 caliber reached just over 50,000, making this model the third most popular out there.

This Single Action Army features the 7-1/2 inch barrel in .38-40, a cartridge that has been compared to modern .40 S&W as far as bullet diameter and velocity.

The overall condition is very good+. Original blue finish and gray patina. Strong action all around—all 4 clicks, tight lockup of the cylinder, crisp trigger. Bright bore with nice rifling and a spot of pitting or two. Both of the hard rubber Colt trademarked grips are firmly seated and remain in good shape. Numbers match. This is a great example of a 7-1/2 inch SAA in a great cartridge with a crisp action!