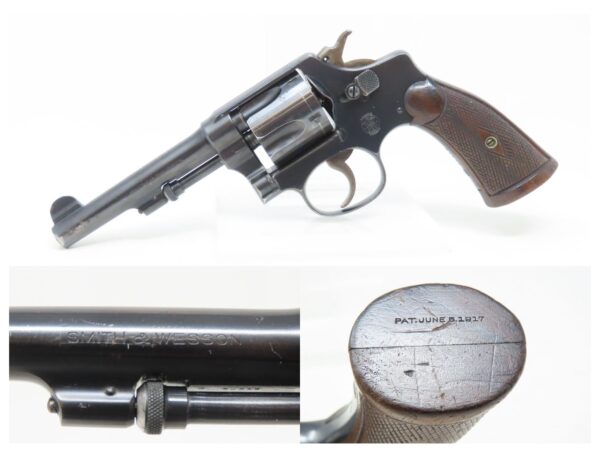 Here we present a C&R Smith & Wesson .38 Regulation Police Double Action Revolver manufactured circa the 1930s in Springfield, Massachusetts. According to the Smith & Wesson Standard Catalog (Supica & Nahas), these revolvers were produced between 1917 and 1942 with serial numbers ranging between 1 to about 55,000. The words “Regulation Police” were featured on the .38 guns, where the .32 Models never has the words “Regulation Police” on them. It came with a 5 shot fluted cylinder. Interestingly, the grips were not interchangeable with other previous models and did not feature a brand logo. However, they did have a stamping on the bottom buttstock “Pat. Jun 5 1917”.

The Regulation Police line was introduced in March of 1917, about a month before the United States declared war on Germany. Later that year the company was given over completely to wartime production of the U.S. Army Model of 1917, a heavy-frame revolver that chambered the .45 ACP cartridge. Thus only a few thousand Regulation Police revolvers were produced before production was curtailed. Production did not ramp up again until 1919.

The Regulation Police was available in two calibers, the .32 Long and .38 S&W (not to be confused with the 38 S&W Special). The .38 S&W is the shorter and less powerful cartridge that S&W introduced for their top break revolvers about 40 years earlier. The .38 version got its own serial number sequence, starting at 1 and running to about 55,000 in 1940, when commercial production was suspended again for wartime contracts. The .32 version was numbered in the .32 Hand Ejector series between 258,000 and 536,000 that had been running for 15 years. The exact production numbers are not known. The .32 was a six-shot revolver, and the .38 cylinder carried only five rounds.

The overall condition is fine. Original blue and case color finish. The action is excellent in both double and single action. The bore is bright and reflective with sharp rifling. The grips show wear and remain solid and in very good shape. A nicely kept S&W Regulation Police in .38!