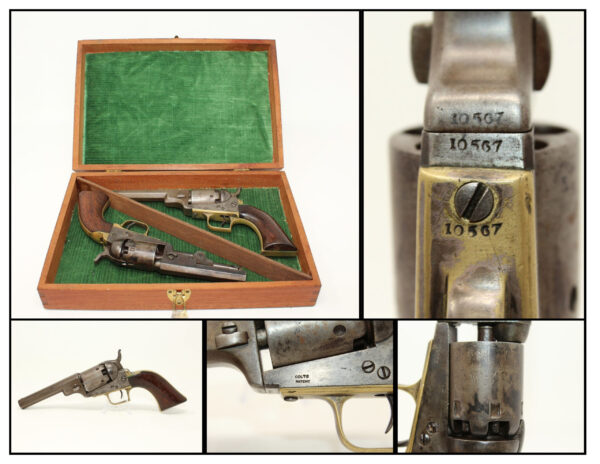 Here we present a very neat cased set of Antique Colt Revolvers in .31 Caliber: a Baby Dragoon, made in 1849, and a Model 1849 Pocket Revolver, made in 1862. Both of these Colt classics were made at the factory in Hartford. The Baby Dragoon was so-named since in many ways it was a down-sized version of the full-sized dragoon, a literal horse-pistol. The Baby is rather scarce as it was only made from 1847 to 1850 and was in many ways sort of a prototype for the Model 1849 Pocket that would come out in 1849. Only 15,000 of the Baby Dragoon were made during those years. This one has earlier features such as a square-backed trigger guard like some of the other early Colt revolvers had, as well as no provision for a loading lever.

The Model 1849 Pocket was slightly more refined and, unlike the Baby, features a rounded trigger guard and does include a loading lever for more convenient loading. It still retains the single action functionality. The Model 1849 Pocket ended up as one of Samuel Colt’s crowning achievements during his lifetime, becoming a hit with the public that was made from its inception in 1849 until the rise of cartridge firearms in the early 1870s.

The overall condition of each revolver is good. Mostly gray patina throughout. The markings are clear. The grips are in good condition. The numbers match on each. The bores are in very good condition with nice rifling. The actions remain strong and crisp. The case is in very good condition. Here is a fantastic opportunity to own both of Samuel Colt’s pocket revolvers that many would have carried prior to the Civil War and throughout the rest of the eventful 19th Century!