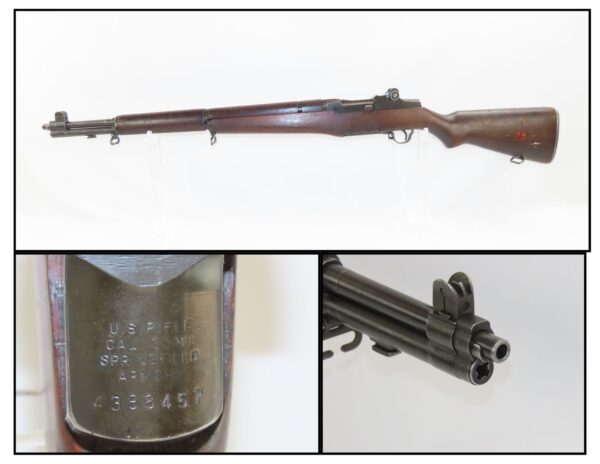 Here we present a Springfield U.S. M1 Garand Rifle, manufactured in 1953 at Springfield Armory in Springfield, Massachusetts. This .30-06 caliber semi-automatic rifle was that standard U.S. service rifle during World War II and the Korean War and also saw service during the Vietnam War. Most were issued to U.S. forces, though some were also provided as foreign aid to American allies. To say that it was and is highly regarded would be an understatement. In the words of General Patton, “In my opinion, the M1 rifle is the greatest battle implement ever devised.”

The M1 Garand was the first standard issue semi-automatic United Stated military rifle, and by most accounts, performed well. The M1 replaced the bolt action M1903 Springfield as the standard U.S. service rifle in 1936 and was itself replaced by the selective fire M14 rifle in March of 1958. Although, some Garands were still being used by the United States into the Vietnam War in 1963, despite the M14 being adopted 5 years earlier. It wasn’t until 1965 that the changeover from the M1 was fully completed in the active duty component of the Army. The Garand remained in service with the Army Reserve, Army National Guard, and the Navy into the early 1970s. Production was stopped in the early months of 1957. This rifle was produced just after the end of the Korean War.

The overall condition is very good. The action is excellent. The bore is bright and clean with strong rifling. The stock was certainly used and remains solid. A circle “P” is stamped on the bottom of the grip and a faint but still visible federal eagle cartouche is stamped on the left side. The barrel is “SA” marked for Springfield Armory, “P” proof marked, dated “12 53” and also bears the federal eagle marking. Here is a fantastic piece of American history!