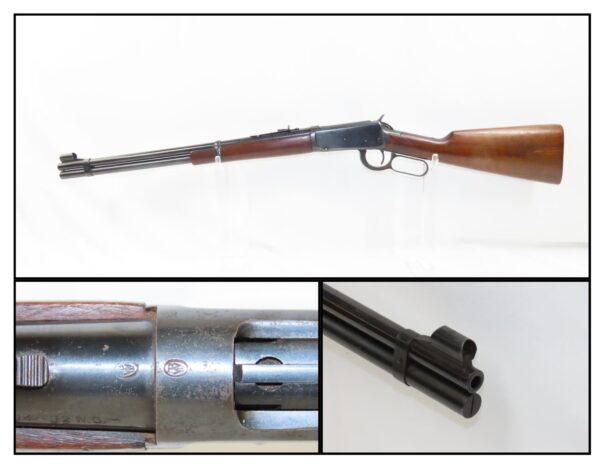 Here we present a C&R Winchester Model 94 Lever Action Carbine in .32 WS, made in 1949 in New Haven, Connecticut. The credit for the design of such a prolific firearm again lies with John Moses Browning, who lent his extensive design talents to a large number of weapon types throughout his career. The Model 1894 was the first Winchester rifle made for use with the new technology of smokeless powder and was developed as a hunting rifle. Over 7.5 million were produced from 1894 until 2006. While various cartridges were supported throughout the run of the gun, the .30-30 Winchester became its staple. In practical use, the Model 1894 became a favorite for general shooters and hunters alike. To this day, it remains a deer hunting favorite, and, in all likelihood, more deer have been taken with the 1894 than any other.

The .32 Winchester Special (or .32 WS) is a rimmed cartridge created in October 1901 for use in the Winchester Model 94 lever-action rifle. It is similar in name but unrelated to the .32-20 Winchester cartridge (which is also known as .32 WCF). This cartridge is based on the .38-55 Winchester cartridge, just as the .30-30 was, but differs from the .30-30 in bullet diameter. More significantly, Winchester decreased the rate of rifling twist in their Model 94 rifle, from 1:12 when chambered for the .30-30 to 1:16 when chambered for the .32 Winchester Special. Winchester used the slower twist to reduce fouling retention when creating a new cartridge for sportsmen who wanted to reload their own ammunition using black powder and cast bullets.