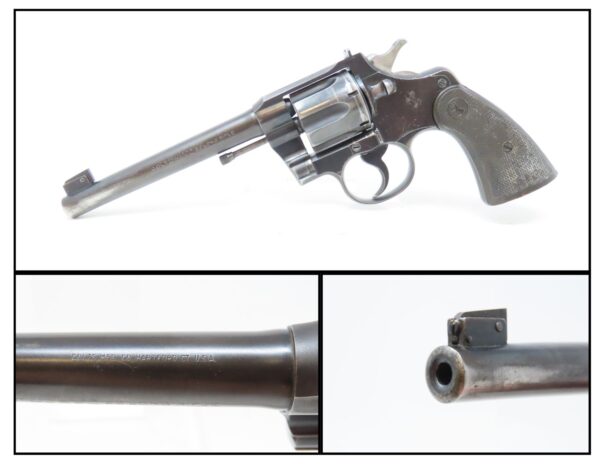 Here we present a C&R Colt Double Action 3rd Issue Officer’s Model Target Revolver manufactured in 1948 in Hartford, Connecticut. This Third Issue variant was introduced in 1927 and produced until 1949. In 1904, Colt manufactured their first medium frame double action revolver like the Colt Officer’s Model we have here. This was technically a variant of the original Colt New Army and Navy Series of 1892 to 1908. For 65 years they manufactured this handgun built on the “E” frame under several different names, one of them being the “Officer’s Model”. Each one was manufactured first and foremost as a target revolver and specifically not as a general-use handgun. These revolvers were available in .22 long rifle, .32 Colt and .38 Special, though Colt dropped the .32 Long Colt chambering in 1940.

The overall condition is near fine. Original blue finish. The action remains in excellent condition. The bore is bright with sharp rifling. The grips are rampant colt marked and are solid.