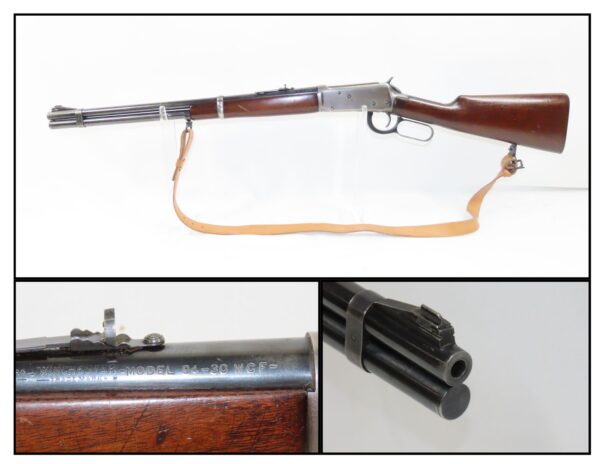 Here we present a C&R Winchester Model 1894 Lever Action Carbine in .30-30 WCF, made circa 1947 in New Haven, Connecticut. The credit for the design of such a prolific firearm again lies with John Moses Browning, who lent his extensive design talents to a large number of weapon types throughout his career. The Model 1894 was the first Winchester rifle made for use with the new technology of smokeless powder and was developed as a hunting rifle.

While various cartridges were supported throughout the run of the gun, the .30-30 Winchester became its staple. In practical use, the Model 1894 became a favorite for general shooters and hunters alike. To this day, it remains a deer hunting favorite, and in all likelihood, more deer have been taken with the 1894 than any other rifle out there.

This one lacks the saddle ring, a feature that was present as a standard option from the start of carbine production but became a popular item to remove or have omitted at the factory. These became known as Eastern Carbines and Winchester in the 1930s would make the ringless carbine standard with the ability to special order it for a small fee.

The overall condition is near fine. Original blue finish. The action is strong all around. Bright bore with excellent rifling. The walnut stock is smooth and solid with signs of handling. A carbine still game for the woods!