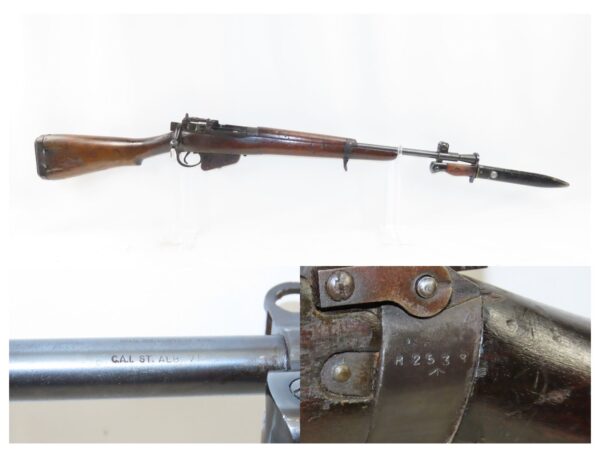 With FEDERATION of MALAYSIA POLICE Marking

Here we present a C&R Fazakerley Enfield No. 5 MK1 Jungle Carbine, made in 1945 at the Royal Ordnance Factory at Fazakerley, a suburb of Liverpool, England. The Enfield No. 5 Mk1 was a derivative of the British Lee–Enfield No. 4 Mk1 rifle. After experiencing the harsh reality of jungle fighting in the Pacific during World War II, the British came to the conclusion that a rifle shorter and lighter than the standard issue, bolt action .303 caliber No. 4 rifle was required. However, its primary operational use was in post-war colonial campaigns such as the Malayan emergency, where it gained its common nickname of the “Jungle Carbine.”

The rifle was first issued to British airborne forces in Norway towards the end of the Second World War. These were troops that were likely to be sent to the Far East for an invasion of Japan, which obviously never happened.

The British No. 4 rifle was a development of the Short, Magazine Lee-Enfield Rifle. It featured a heavier, flat sided body, a heavier barrel, and an aperture rear sight. The No. 4 was approved for service in November of 1939, but due to the difficulties of setting up production in new factories, it didn’t see large scale production until early 1942. After that point, it became the primary British and Canadian infantry weapon. Production took place at the Royal Ordnance Factories at Fazakerley and Maltby, along with the BSA’s plant at Shirley and in the USA & Canada.

The overall condition is very good. Strong action. Bright, clear bore. The stock is solid with an average amount of wear (minor dents and dings). Legible markings. The bayonet is in good shape. “9/45” dated on the left receiver. The right side of the socket is marked “FMP” for the Federation of the Malaysian Police.