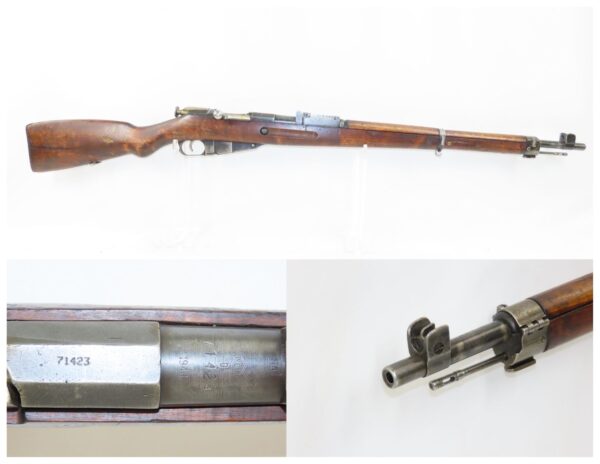 Here we present a C&R Finnish VKT Mosin-Nagant M39 Rifle, made in 1944 at the Valtion Kivääritehdas, States Rifle factory in Finland. The Finnish model is a variant of the original Russian Mosin-Nagant Model 1891.

The Finnish M39, nicknamed “Ukko-Pekka” after the former President Pehr Evind Svinhufvud, was a compromise between the Army and White Guard, adopted so as to standardize Mosin–Nagant production. The M39 was derived largely from the M28-30, but included some alterations proposed by the Army. The M39 also incorporated a semi-pistol grip into the stock, though some early examples used typical Mosin–Nagant straight stocks. Only 10 rifles were completed by the end of the Winter War, but 96,800 were produced after the Winter War and used in the Continuation War. Small numbers were assembled from leftover parts in the late 1960s through 1973, bringing the total production to approximately 102,000.

This specimen is dated “1944” and marked with various inspection marks. It is chambered in the 7.62x54R cartridge, with a magazine capacity of 5.

The overall condition is good. The action is excellent. The bore is shiny bright with sharp rifling. The stock shows much wear and remains solid. There is a split in the upper handguard. Barrel and receiver numbers match with others being mixed. Import marked.