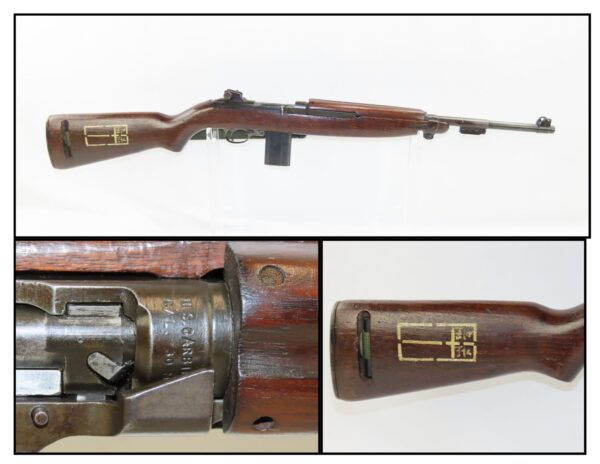 By the “Inland Division” of GENERAL MOTORS

Here we present an Inland U.S. M1 Carbine Semi-Automatic Rifle, manufactured in 1943 at the Inland Division of General Motors in Dayton, Ohio. This .30 caliber semi-automatic rifle was first used by the United States Armed Forces on October 22, 1941 and Inland Division was the first of 10 manufacturers to receive an order two months later in November of 1941, and was one of the only two still producing carbines when the war ended in 1945. Of the 6,110,730 carbines made of all types built during the war, Inland made 2,625,000, or 43% of the total. Despite having similar name and appearance, the M1 Carbine is not a carbine version of the M1 Garand rifle. They are different firearms and use different ammunition.

Prior to World War II, U.S. Army Ordnance received many reports that the full-size M1 Garand was too heavy and cumbersome for most support troops, such as mortarmen and radiomen to carry. During prewar and early war field exercises, it was found that the M1 Garand impeded these soldiers’ mobility, as a slung rifle would frequently catch on brush, bang the helmet, and tilt it over the eyes. Many soldiers found the rifle slid off the shoulder unless slung diagonally across the back, where it prevented the wearing of standard field packs and haversacks. Additionally, Germany’s use of glider-borne and paratroop forces to launch surprise ‘blitzkrieg’ attacks behind the front lines generated a request for a new compact infantry weapon to equip support troops. This request called for a compact, lightweight defensive weapon with greater range, accuracy, and firepower than handguns, while weighing half as much as the Thompson submachine gun or the M1 rifle. The U.S. Army decided that a carbine would adequately fulfill these requirements and specified that the new arm should weigh no more than five pounds and have an effective range of 300 yards. Paratroopers were also added to the list of intended users and a folding-stock version would also be developed.

The overall condition is very good. The action is strong. The bore is bright and remains in good shape. Both the barrel and receiver are Inland marked. The barrel is dated “9-43”. This unique example has hand painted markings on the stock and includes a canvas sling and oiler!