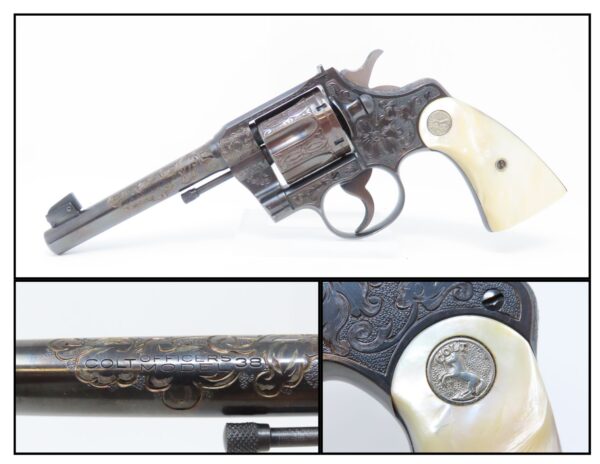 Here we present a Lettered Colt 3rd Issue Double Action Officer’s Model Revolver in .38 Special, manufactured in 1941 and shipped by itself to the Stambaugh-Thompson Hardware Company in Youngstown, Ohio. The letter lists this in .38 Colt but this is a typo and this revolver is actually in .38 Special. This Third Issue variant was introduced in 1927 and produced until 1949.

This revolver is very finely engraved throughout, featuring large, heavy flower blossoms with punch-dotted backgrounds. Leafy scrolls adorn the barrel surrounding the roll markings. The backstrap is diamond checkered, as is the face of the trigger, and the rear of the cylinder release. The grips are solid mother-of-pearl with the rampant Colt medallions set in. The sights are nice target types. This is a gorgeous gun with a fantastic action: very smooth and relatively easy double action, and a short, crisp single action.

The overall condition is very fine. The action is excellent. Both grips are in excellent shape remaining fiery in appearance! The bore is bright and reflective. A one-of-a-kind Colt Officer’s Model!