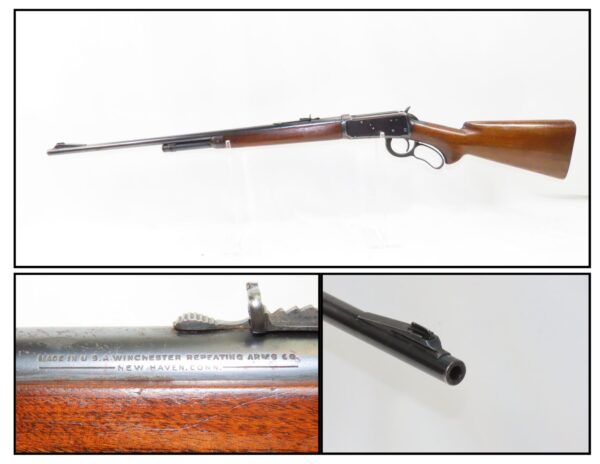 Here we present a C&R Winchester Model 64 Lever Action Rifle manufactured in New Haven, Connecticut in 1935. Production began in late 1932, and in 1933, Winchester introduced the Model 64 lever-action rifle as an evolved version of the 53 and 55 Winchester rifles—all variations on the original Model 1894. The Model 64 was available in .30 WCF (30-30), .32 WS, .25-35, and .219 Zipper (1938-1941) cartridges. This rifle could be ordered with a round 24 or 20-inch barrel, the wood walnut, plain or checkered, with a pistol-grip stock and shotgun buttplate. The frame and barrel were blued and had a solid feature with a forged front sight. There were two variants offered, which were the Standard Rifle and the Deer Rifle. Many collectors refer to the Deer Rifle as a “Deluxe”. Production of the Model 64 ended in late 1957, with an estimated at 66,783 manufactured.

This firearm is classified as Curio & Relic.

Very Fast. Very Safe. FREE SHIPPING. Will need to be sent to your local FFL. This firearm is classified as Curio & Relic.