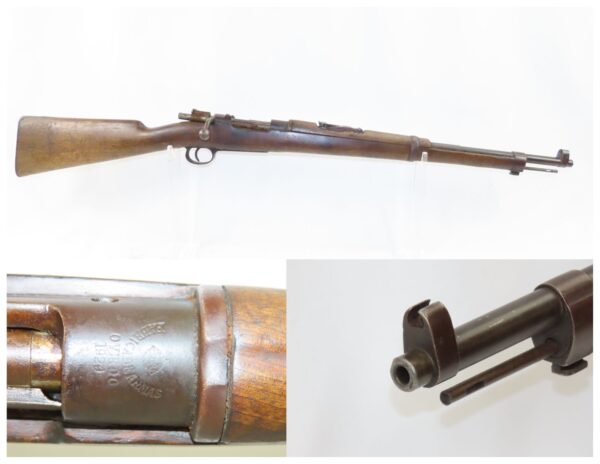 Here we present a C&R Mauser Model 1893 manufactured in 1929. The Mauser Model 1893 is a bolt-action rifle commonly referred to as the Spanish Mauser, though the model was adopted by other countries in other calibers, most notably the Ottoman Empire.

In addition to Mauser, the Spanish 1893 rifles were manufactured under license by a variety of other firms, including Ludwig Loewe & Company and its successor, Deutsche Waffen und Munitionsfabriken (DMW) of Germany, Fabrique Nationale of Belgium, and Fábrica de Armas and Industrias de Guerra de Cataluna of Spain. A total of 206,830 rifles were manufactured in Germany for Spain by 1899, and from 1896 to 1943, Spanish arsenals manufactured more than 2 million of the rifles including all variants. Over the course of Spanish Mauser production, Fábrica de Armas built some 500,000 M1893 rifles at its factory in Oviedo, along with 850,000 M1895s and 325,000 of the modernized Model 1916 rifles.

The M1893 was based on the experimental M1892 rifle, which Paul Mauser developed for the Spanish Army as part of a program to correct deficiencies in the earlier series of Mauser rifles. Spain placed an order for 20,000 of the M1892 rifles on 21 July 1893, with a further 10,000 added on August 27th, but the design quickly led to an improved version, the Model 1893, which replaced the M1892s ordered. The new version incorporated a staggered 5-round magazine that did not extend below the bottom of the stock. This was the first time a Mauser rifle included a fully contained magazine.

The overall condition is good. Strong action. Semi-bright bore, remains in good shape. The stock is solid, contains a stable crack on both the top and bottom of the wrist. “1929” dated barrel. Visible numbers match. Markings are legible.