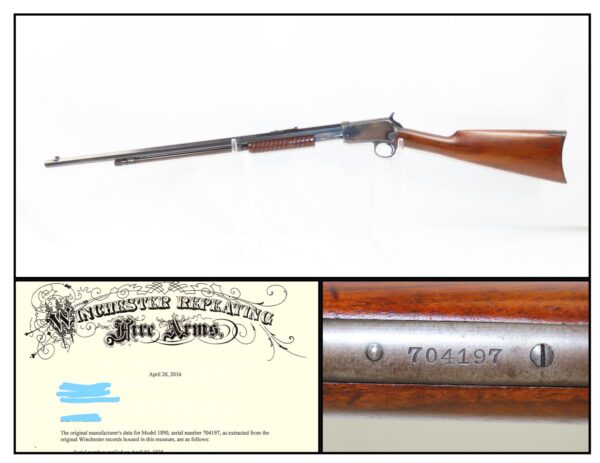 Here we present a Winchester Model 1890 Slide Action Rifle chambered in .22 WRF, manufactured in 1925 in New Haven, Connecticut. In the late 1880s, the Winchester Repeating Arms Company asked John Moses Browning to design a replacement for the Model 1873 rifle, since the rim fire version of the Model 1873 had never achieved any great popularity. On June 26, 1888, a patent for the new design was issued to John & Matthew Browning. Under this patent, Winchester created the second repeating slide action .22 rifle ever successfully developed and manufactured, being narrowly edged out by the Colt Lightning small frame carbine The Model 1890 proved to be the most successful repeating rim fire rifle for general all around shooting ever made by Winchester. Approximately 775,000 Model 1890 rifles were produced between 1890 and 1932. For many years, the Model 1890 was considered to be the standard for use in shooting galleries, hence its nickname of “gallery gun”. Many families would rely on such firearms during the impending Great Depression to feed their families, especially in rural locales.

The overall condition is fine. Original blue finish. Strong action with a smooth slide. Bright bore, sharp rifling. The stock is solid all around. Numbers match. A beautiful rifle from the 1920s!