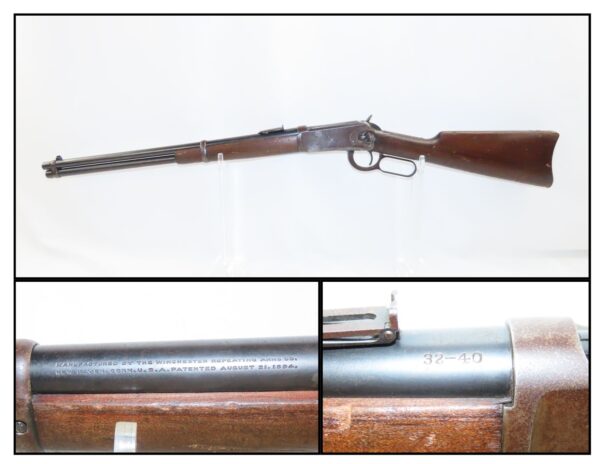 With Scarce GUMWOOD Stock Made Just After the Great War!

Here we present a C&R Winchester Model 1894 Lever Action Rifle, made in 1919 in New Haven, Connecticut. The credit for the design of such a prolific firearm again lies with John Moses Browning, who lent his extensive design talents to a large number of weapon types throughout his career. The Model 1894 was the first Winchester rifle made for use with the new technology of smokeless powder and was developed as a hunting rifle. Over 7.5 million were produced from 1894 until 2006. While various cartridges were supported throughout the run of the gun, the .30-30 Winchester became its staple. In practical use, the Model 1894 became a favorite for general shooters and hunters alike.

To this day, it remains a deer hunting favorite, and, in all likelihood, more deer have been taken with the 1894 than any other. This Model 1894 carbine features a 20-inch round barrel chambered in .32-40 Winchester Center Fire. Many gun owners favored Winchester rifles for their ability to fire the same ammunition as their pistols, meaning that a cowboy, trapper or stagecoach defender could take along his trust rifle and pistol sidearm with only one supply of ammo!

The overall condition is fine. Original blue finish. The action is strong and crisp with a smooth and quick lever. Solid gumwood stock with expected wear from use. Bright bore with sharp rifling. A handsome example of the 1894 Winchester from 1919!