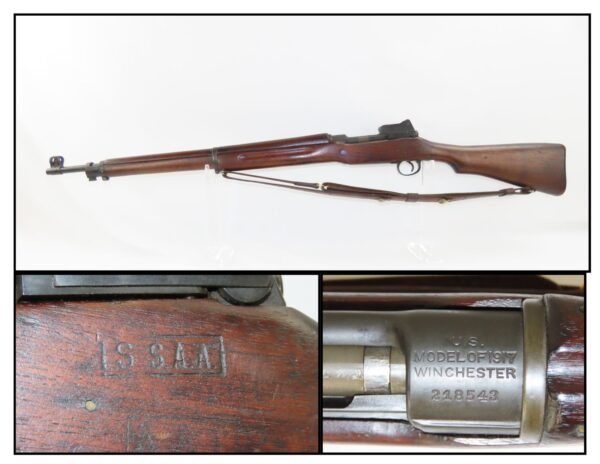 Here we present a Winchester U.S. Model 1917 Bolt Action Rifle, made in 1918 in New Haven, Connecticut. The Winchester M1917 was an adaptation of Britain’s Enfield Pattern 1914 that both Remington & Winchester were producing during the Great War. This was prior to direct American intervention in the worldwide conflict. When the U.S. entered the war, they too needed all the small arms production they could muster for the war effort. Rather than retooling these factories to produce the American Model 1903, the U.S. Ordnance Department simply elected to adapt the Enfield Pattern 1914 to American specifications, primarily chambering the rifle for .30-06 Springfield, creating the U.S. Model 1917. These went to arm the American Expeditionary Force in Europe during WWI.

An Model1917 Enfield rifle was used by Sergeant Alvin C. York on October 8, 1918, during the event for which he was awarded the Medal of Honor, according to the U.S. 82nds division’s official history. His citation for the medal reads “After his platoon had suffered heavy casualties and 3 other noncommissioned officers had become casualties, Cpl. York assumed command. Fearlessly leading 7 men, he charged with great daring a machinegun nest which was pouring deadly and incessant fire upon his platoon. In this heroic feat the machinegun nest was taken, together with 4 officers and 128 men and several guns.”

The top of the barrel is marked “U.S./MODEL OF 1917/WINCHESTER”. The top of the barrel just behind the front sight is marked “W/FLAMING BOMB U.S. ORDNANCE MARK/3-18” and USMC marked bolt. The flaming bomb also appears on the bolt handle and the left side of the receiver. Other parts feature acceptance marks. “S.S.A.A” and “A.A.1” are stamped into the left side of the stock. A double stamped sans serif “P” is stamped to the rear of the trigger guard. “H[?].M. FREIHEIT” is hand engraved a top the bolt.

The overall condition is very good. The action is robust through and through. The bore is in very good shape with strong rifling. The stock is solid and smooth. This example includes a well-made leather sling by Hunter. Here is a great piece of American WWI history to collect and display!