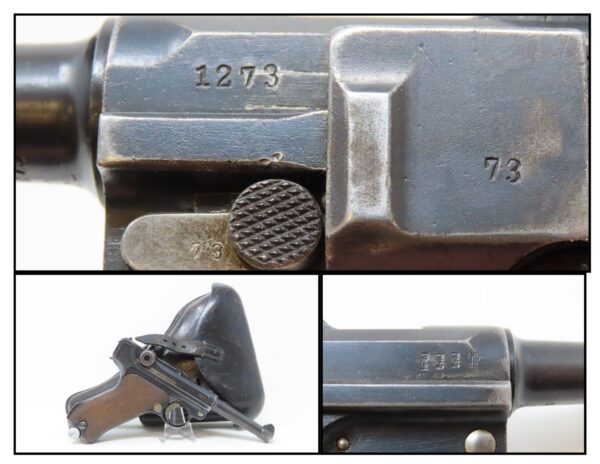 Here we present a World War I Double Dated “1917” & “1920” Model 1914 Luger Semi-Automatic Pistol, originally made in 1917 by DWM in Berlin, Germany. Basing his design off Hugo Borchardt’s seminal C93, Georg Luger successfully brought Borchardt’s work to practical fruition. While finding buyers for the C93 seemed an exercise in futility, the new Luger Pistol found many countries eager to test it and even adopt it.

There are many variations in this field of collecting, but relatively few major changes in overall design from beginning to end. The Luger is certainly one of the most iconic firearms in history, made so by its association with Germany during both World Wars.

This one is a war-time product that was originally dated 1917. After the war, under the stipulations of the Treaty of Versailles, firearm stores and production was limited. Thus the date of 1920 was applied in that year as a Reichswehr property stamp as they took these military pieces back in to be armored and redistributed. Inevitably, many of these were still in service during World War II years later. The right side of the frame bears WWI German military acceptance marks. Also included is a “1941” dated black leather holster with an extra magazine and takedown tool.

The overall condition is near fine. The action is excellent. The bore is bright. The numbers match on the pistol, but the magazine numbers vary. Both grips are in good shape with nice checkering. This is a great Luger pistol with tons of associated history from the World Wars!