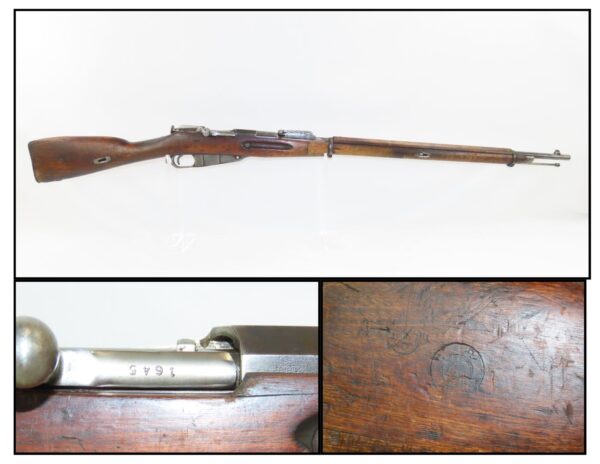 Here we present a Westinghouse Imperial Russian Contract Model 1891 Mosin-Nagant Rifle, made in 1915 in East Springfield, Massachusetts. This rifle was manufactured by the New England Westinghouse Company under contract with the Imperial Russian government to supplement the low numbers of small arms possessed by the Russian armed forces. After the outbreak of the October Revolution in November of 1917, the Russian monarchy fell, and the resulting government defaulted on their orders for rifles from American companies claiming the rifles were of poor quality. In reality, the Russians had neither the necessary funds nor willingness to pay for the rifles. The New England Westinghouse Company was founded in 1915 whose primary purpose was to fulfill this contract to produce 1.8 million of these Mosin-Nagant rifles for Czar Nicholas II of Russia during World War I.

The overall condition is good. The action is strong. The bore is bright. The stock looks like it has been through a couple wars, with the most noticeable repair being the grafting of another stock, which is visible just below the rear sight. It looks like this might have been done during the period of use. This is a really interesting Russian rifle that was made under the Empire, fought during the Great War, almost certainly changed hands during the Revolution, and may have even been used again in World War II.