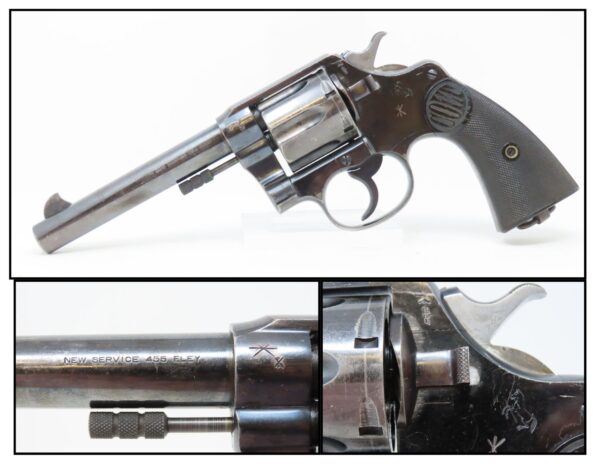 Here we present a Colt “New Service” Revolver in .455 Eley, made in 1914 in Hartford, Connecticut for the British at the beginning of World War I.

The Colt New Service is a large frame, large caliber, double-action revolver made by Colt from 1898 until 1946. In 1898, Colt Firearms released a new six-shot revolver chambered for the .455 Eley cartridge as the Model 1898 – better known as the “Colt New Service”. The New Service line would end up being produced from 1898 to 1946 to the tune of over 356,000 examples by the Colt Patent Firearms Manufacturing Company. The New Service line was adopted by the United States military through the Army, Marine Corps and Navy service branches, these under the designation of “Model 1909” and retaining the .45 Colt chambering. Not surprisingly, the New Service line managed to see operational use from 1898 into 1946, encompassing World War 1 (1914-1918) and World War 2 (1939-1945) as well as a plethora of other conflicts in between. Some also found their way onto the battlefields of the Vietnam War (1955-1975). First use of the New Service revolver was in the 1898 Spanish-American War.

The overall condition is fine. Original blue finish. The action is strong and tight all around. The bore is bright in fine shape. Both grips are firm with sharp checkering. This example contains British proofs and military “broad arrow” markings. A really nice Colt made for the British Government during the Great War!