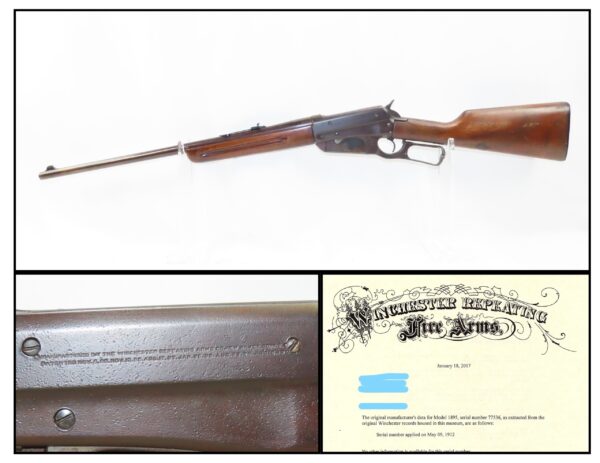 Here we present a C&R Winchester Model 1895 lever action repeating rifle manufactured May 9, 1912 in New Haven, Connecticut, and chambered in .30 US, also known as the .30-40 Krag. The Model 1895 was the first Winchester rifle to feature a box magazine located underneath the action instead of the tubular magazine design, which had remained fundamentally unchanged from the Winchester 1866. This allowed the rifle to safely chamber military and hunting cartridges with pointed bullets. The M1895 was also the last of the lever-action rifles to be designed by John Moses Browning and featured a rear locking bolt as in his previous designs dating back to the Winchester 1886. The M1895 was the strongest lever-action rifle Winchester had produced, designed to handle the increased pressures generated by the more powerful smokeless powder cartridges entering common use at the time of its introduction.

There were 425,881 Model 1895s produced. At around serial number 5000, a new receiver profile was introduced which had fluted sides, as opposed to the original flat sided design. This new receiver reduced the weight of the rifle by a small amount and increased the width by 1/16 of an inch.

This 1895 Winchester has a bit of everything going for it. It is an innovative design by none other than John Moses Browning, it’s Lettered, a history of usage by many of the top hunters of the early-20th Century, an early issue, and chambered in a neat old cartridge that is still available today!

The overall condition is good. Weathered metal surfaces lightly pitted throughout. Strong, tight action. Bright, sharply rifled bore. The butt stock is a replacement piece, and it has a crack on the left side.