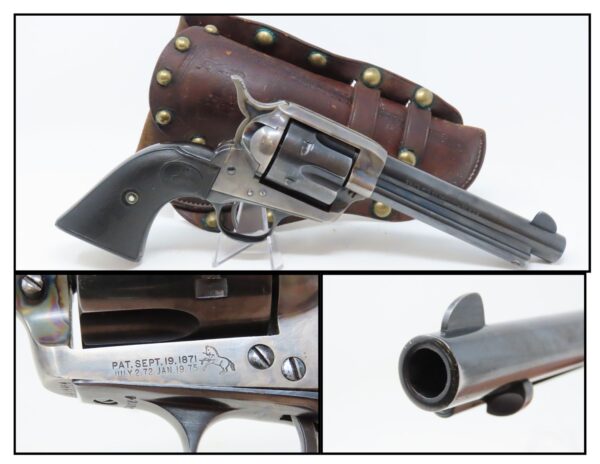 Here we present a First Generation Colt Single Action Army Revolver in .45 Long Colt, manufactured in 1912 in Hartford, Connecticut. The Colt “Peacemaker” was introduced in 1873 and has become one of the most iconic firearms in all of history, thanks to its widespread use by the U.S. military, civilians and, more recently, in Western films. Total production numbers for the “First Generation” (c. 1873-1940) Colt Single Action Army reached 357,859. These continued to be relied upon as well as “hot-rodded” by the likes of Elmer Keith, Skeeter Skelton, many other lawmen and gun writers of the time.

This revolver comes with a holster marked V.L. &A./Chicago, which stands for Von Lengerke & Antoinne, which was formed in early 1891 and quickly became a very prominent sporting goods retailer in downtown Chicago. Their products were from the finest manufacturers and appealed to an upscale clientele.

The overall condition is very fine. Lovely blue finish and case colors. The action is as strong as ever. The bore is bright throughout with sharp rifling. The barrel was replaced sometime post-war. Both grips are firm and the repair on the rear of the left panel is stable. The case-colored frame with blued barrel and trigger guard makes this a truly standout piece! The numbers match. This example includes a dark leather, tack decorated, and hand tooled holster stamped “V.L. & A./CHICAGO”. On the underside of the holster “G 1344/5” can be read. This is a fantastic 1st Generation Colt Single Action Army with an original leather double loop rig from a very recognizable retailer in Chicago!