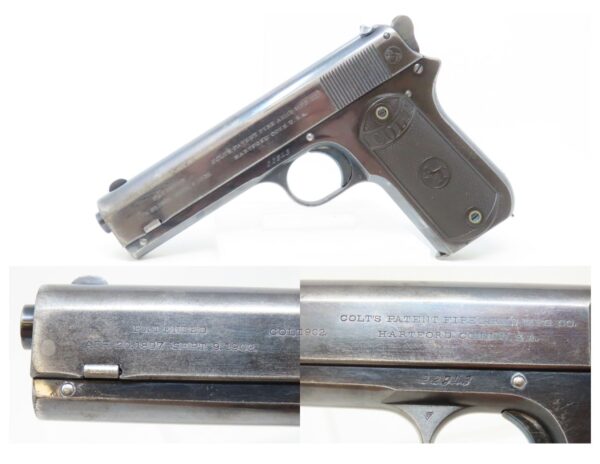 Here we present a Colt Model 1903 Pocket Hammer Semi-Automatic Pistol in .38 Auto, manufactured in Hartford, Connecticut in 1908. The Colt factory archive letter confirms the details of this pistol, as well its being shipped to Simmons Hardware Company in Saint Louis, Missouri, on January 18, 1908.

The Colt Model 1903 Pocket Hammer was a short-recoil, semi-automatic pistol, designed by the American arms designer John Moses Browning. It was a compact version of the Colt Model 1902 Sporting Model pistol derived from the original Colt Model 1900. This pistol is chambered for .38 ACP, which is the same as .38 Auto, which is stamped on the slide as “Calibre 38 rimless smokeless”. The 38 ACP was a slightly less powerful cartridge than the 9mm Para, causing it to lose popularity due to the lesser power.

Initially popular, the sales of the .38 ACP models dropped off with the introduction of the M-1905 in .45 caliber, and then the M-1911 caused sales of the .38 to essentially cease. Colt listed it in their annual catalog until existing parts were used up in the early 1920s. Production of the Model 1903 Pocket Hammer Model, which, I mentioned, was basically just a short-barreled 1902 Sporting Model, began in earnest in 1904 (only one hundred pistols seeing production in 1903) with production varying from about 1,200 to 2,300 each year until 1917 when production curtailed sharply due to World War I. Serial numbers of the 1903 Pocket Hammers started at 19999 in 1903 and went backward to 16000 into 1906. After that, serials resumed at 20000 and went up to 47227 ending in 1927 when production discontinued. An approximate total of 29,237 were produced.

The overall condition is fine. Original finish. The action is excellent. The bore is bright with sharp rifling. The grips are in nice condition. A superior example of an early Colt designed by John Moses Browning!