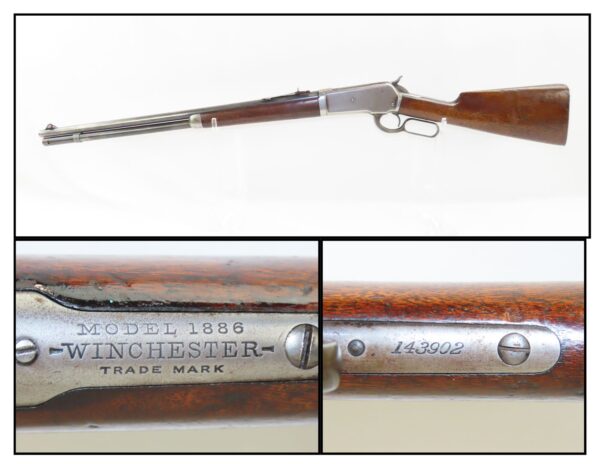 Turn of the Century TAKEDOWN RIFLE!

By today’s standard, referring to a 7½-pound hunting rifle as “light weight” might be open to debate, but at around the turn of the last century, this big-game lever-action rifle was state-of-the-art. Winchester also took note of its popular lever-action’s heft and introduced the 1886 Light Weight in 1896. Chambered in .45-70 Gov’t and featuring a 22-inch round, tapered barrel, a half magazine, a hard rubber shotgun buttplate and a straight-grip stock, this was also Winchester’s way of eliminating many special order options. In 1902, the Extra Light Weight, like this one, was also chambered for the .33 Win., albeit with a 24-inch barrel. The Extra Light Weight was discontinued in 1919. Not many of these slimmed-down ’86s were produced, making them one of the more desirable Winchester variants.

The overall condition is very good. The action is strong and crisp. The bore is bright in good shape. Despite the crack on the underside of the fore end (which remains stable) the stock is solid. A good rifle for the reloader!