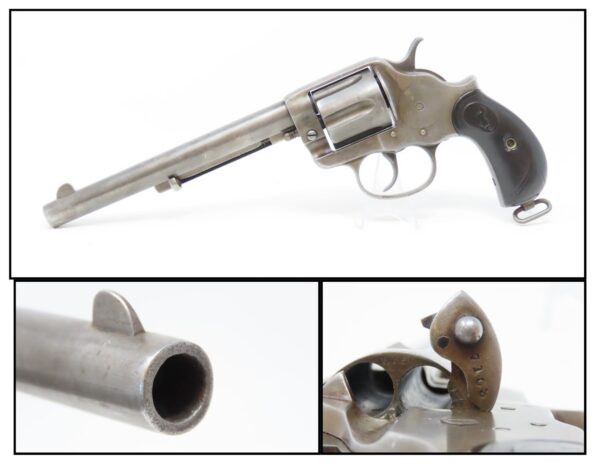 Here we present a Colt Model 1878 Double Action Revolver, made circa 1902 in Hartford, Connecticut. This was the second of Colts’ double action revolvers. Single action revolvers were considered more reliable, and for good reason. However, the company released their Model 1877, called the “Lightning” in .38 Colt, the “Thunderer” in .41 Colt, and the “Rainmaker” in .32 Colt. A year later, they released the larger Model 1878 that came in many more chamberings, many of the same as the Colt Single Action Army including .45 Colt, .44-40 WCF, .38-40 WCF, and .32-20 WCF among the more common cartridges.

This one has a frame with the inspection marks of Rinaldo A. Carr. Though this was not a military revolver, there was a version of the Model 1878 that was. This was likely an overrun that was not accepted or needed by US Ordnance and therefore utilized by Colts to create a complete revolver for commercial production.

The overall condition is very good. The action is strong. The bore is in good shape. The right grip has lost a chip from the back side of the panel and the left grip has a small chip from around the grip screw. The finish has matured to a smooth light gray patina. Here is a Colt Frontier Model 1878 with a .45 Colt 7 ½ inch barrel!