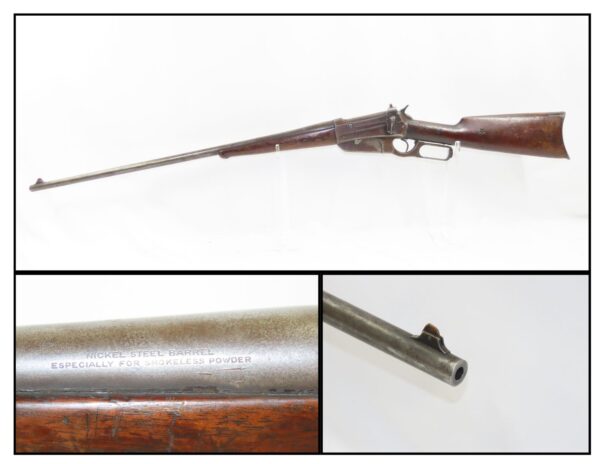 Here we present a C&R Winchester Model 1895 lever action repeating rifle manufactured in 1901 in New Haven, Connecticut, and chambered in .30 US, also known as the .30-40 Krag. The Model 1895 was the first Winchester rifle to feature a box magazine located underneath the action instead of the tubular magazine design, which had remained fundamentally unchanged from the Winchester 1866. This allowed the rifle to safely chamber military and hunting cartridges with pointed bullets. The M1895 was also the last of the lever-action rifles to be designed by John Moses Browning and featured a rear locking bolt as in his previous designs dating back to the Winchester 1886. The M1895 was the strongest lever-action rifle Winchester had produced, designed to handle the increased pressures generated by the more powerful smokeless powder cartridges entering common use at the time of its introduction.

The Model 1895 rifle in .30 US is most commonly associated today with former President Theodore Roosevelt and the Battle of San Juan Hill in Cuba during the Spanish-American War. However, it was also used by many famed hunters and adventurers, to include Martin and Osa Johnson, Charles Cottar, and author Stewart Edward White. Gerrit Forbes, first cousin of Franklin D. Roosevelt, recommended the M1895 to Theodore Roosevelt who took two M1895 chambered in .405 rifles with him on his 1909 safari to East Africa. Arizona & Texas Rangers, among other law enforcement are also known to have favored and used the Model 1895.

The overall condition is good. Nothing wrong mechanically. The action is excellent. The bore is in nice shape, clean with good rifling. The walnut stocks on this gun show that this was a real working gun. There is a star stamp on the left side of the buttstock and a section that looks as though it was charred on the right, though it continued to be used as is evidenced by its worn smooth look and feel. There is a slight movement at the wrist and tang. This gun is untouched and has its original finish/patina. The rear sight dovetail was plugged long ago and the front sight blade has been replaced with an old homemade copper one. This is the kind of rifle that you pick up and can almost feel transported in time.