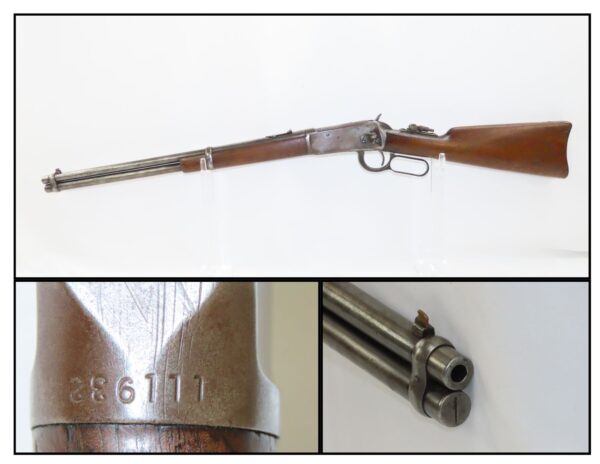 Here we present a C&R Winchester Model 1894 Lever Action Carbine, made in 1901 in New Haven, Connecticut. The credit for the design of such a prolific firearm again lies with John Moses Browning, who lent his extensive design talents to a large number of weapon types throughout his career. The Model 1894 was the first Winchester rifle made for use with the new technology of smokeless powder and was developed as a hunting rifle. Over 7.5 million were produced from 1894 until 2006. While various cartridges were supported throughout the run of the gun, the .30-30 Winchester became its staple. In practical use, the Model 1894 became a favorite for general shooters and hunters alike. To this day, it remains a deer hunting favorite, and, in all likelihood, more deer have been taken with the 1894 than any other. This was a handy longarm in use by everyone from outlaws to law enforcement, cowboys, miners, loggers, and just about anyone you can think of!

The overall condition is good+. The action is strong. The bore is in great shape: reflective with nice rifling. This example sports a solid stock all around with expected wear. There is a stable split in the front of the forearm. The Marble’s tang-mounted rear sight does not lock out in the raised position, but the 3-leaf barrel mounted sight works just fine and is marked for 50, 100 and 200. A true classic for the West or the woods!