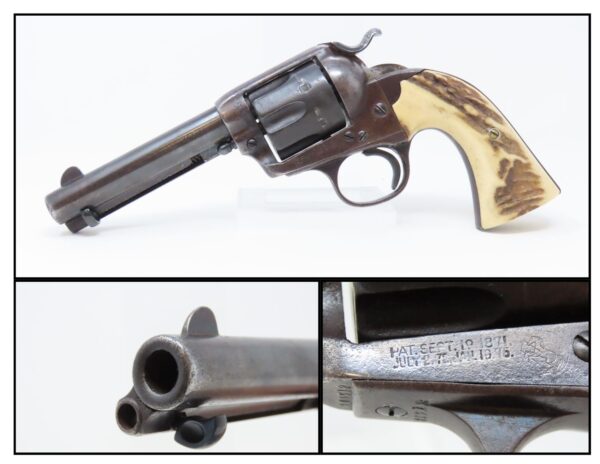 Here we present a Lettered C&R Colt Bisley Model Single Action Army Revolver in .41 Long Colt & with Stag Grips, manufactured in Hartford, Connecticut in 1901 and shipped to W.B. Belknap & Company of Louisville, Kentucky on May 16, 1901.

Out of 44,350 Bisley revolvers made, only 3,159 were chambered for .41 Colt cartridges. Though Colt enjoyed the largest contracts of any handgun maker during the American Civil War, it had to rely on its array of percussion fired revolvers, namely the 1860 Army until the Smith & Wesson owned Rollin White Patent expired in 1869. This enabled them to begin making revolvers with completely bored through cylinder chambers in order to utilize modern metallic cartridge ammunition in the most effective manner. In 1869, Colt’s began development of a suitable cartridge revolver in earnest, first coming out with a number of conversions for their percussion lines, until 1872 when they debuted what was to become the Colt Model 1873 Single Action Army in the 1872 U.S. Trials. Needless to say, it won, and became the Army’s revolver of choice. It also became the sidearm of choice for many others like cowboys, guards, lawmen, crooks, shopkeepers and all manner of civilians.

This is an example of the Bisley variant of the Colt Single Action Army revolver. The primary differences were a lower hammer spur and a more curvaceous grip frame. These were optimized toward target shooting but many general users and shooters who were not simply target shooters preferred them as well. This one comes in the scarce .41 Colt chambering, which was a manstopper in its day—and according to Elmer Keith in his 1961 Sixguns the .41LC “ better for self-defense than any .38 Special load made.”

The overall condition is very good. This one was used often and honestly out of doors by the looks of it. There are some signs of weathering throughout and it wears an old refinish. Lovely stag grips that remain solid are a nice personalized touch. Strong action all around. The bore is still in good shape with good rifling. Visible numbers match. This Colt Bisley would make a great addition to your collection, made in 1901 and in a classic Colt cartridge!