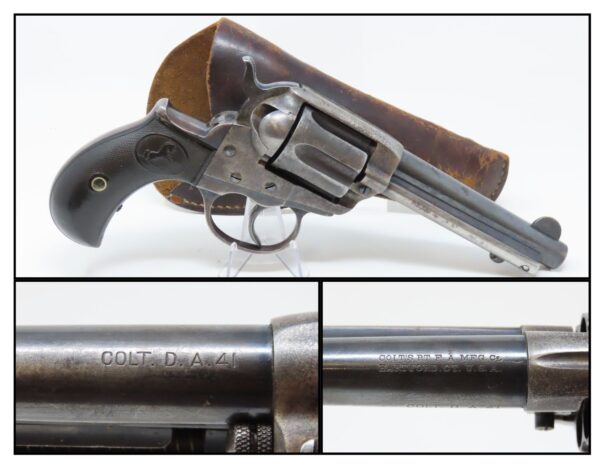 Double Action Revolver Made in 1900 with HOLSTER

Here we present a C&R Colt Model 1877 “Thunderer” Revolver, manufactured circa 1900 in Hartford, Connecticut. The Model 1877 was offered in three calibers, which lent them three unofficial names: the “Lightning”, the “Thunderer”, and the “Rainmaker”. Neither “Lightning” nor “Thunderer” were Colt designations, nor used by the factory in any reference materials. Both terms were coined by Benjamin Kittredge, one of Colt’s major distributors. Kittredge was responsible for the term “Peacemaker” for the Colt Single Action Army.

The principal difference between the models was the cartridge in which they were chambered. The “Lightning” being chambered in .38 Long Colt and the “Thunderer” in .41 Long Colt. Both models had a six-round ammunition capacity. An earlier model in .32 Colt known as the “Rainmaker” was offered in 1877. The 1877 “Thunderer” in .41 caliber was the preferred weapon of Billy the Kid and was his weapon of choice when he was killed by Pat Garrett in 1881. Elmer Keith was also a fan of the .41 Colt cartridge and said about it in his 1961 book Sixguns: “41LC was a better fight-stopper than its paper ballistics would indicate.” Keith would go on to design the .41 Magnum.

This revolver comes in an original period open top belt holster in very good condition. There is a bit more wear at the exterior bottom of the holster where the ejector housing has rubbed. The only marking is a “3” stamped on the belt loop.

The overall condition is fine. Original blue finish and silvered case colors. Excellent action. The bore is bright with nice rifling. Both grips are good with expected wear. Numbers match. This is a very nicely preserved Colt Thunderer with a great action and a fantastic old holster!