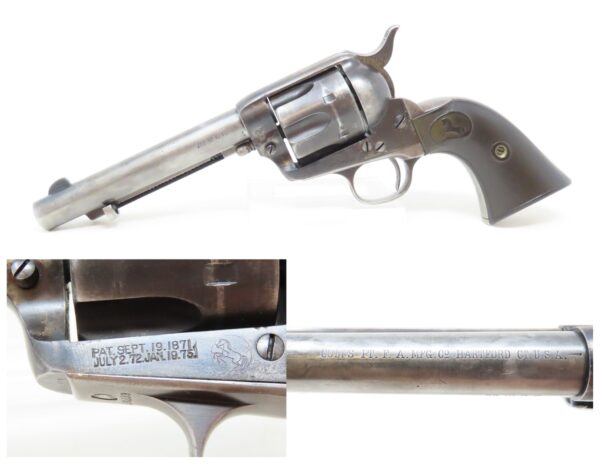 Here we present a C&R Colt Single Action Army Revolver, manufactured in 1900 in Hartford, Connecticut. The Colt “Peacemaker” was introduced in 1873 and has become one of the most iconic firearms in all of history, thanks to its widespread use by the U.S. military, civilians and, more recently, in Western films. Total production numbers for the Colt Single Action Army reached 357,859. The production numbers for the .32 WCF caliber reached 43,284, making this model the second most scarce out there, only ahead of the .41 Colts. These revolvers made excellent companions to rifles at the time as they were chambered for the same ammunition, meaning that the user only had to keep one type to feed both guns.

The overall condition is good. The action is strong with 4 clicks. The hammer holds all cock-notches firmly. The cylinder indexes and locks up. The bore has been sleeved for the same cartridge and is clean with sharp rifling. The markings on the barrel have been re-stamped, though all the other markings are original. The numbers match. The rampant Colt trademarked hard rubber grips are in nice shape, showing honest use, and solid.