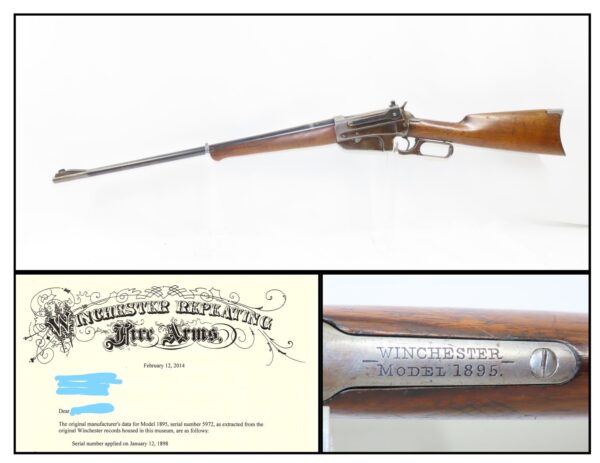 Here we present an antique Winchester Model 1895 Lever Action Rifle, manufactured in 1898 in New Haven, Connecticut, and chambered in .30 US, also known as the .30-40 Krag. The Winchester archive letter from the Cody Firearms Museum confirms the manufacture date as January 24, 1898, the caliber, and the fact that this was a “new system” gun, meaning that the receiver was not the earlier “flat side” variant.

There were 425,881 Model 1895s produced. The serial number on this rifle is 5972. At around serial number 5000, a new receiver profile was introduced which had fluted sides, as opposed to the original flat sided design. This new receiver reduced the weight of the rifle by a small amount and increased the width by 1/16 of an inch.

The overall condition is very good. This rifle was re-barreled and they stayed with the .30-40 Krag cartridge as it had been from the factory. Robust action. Bright bore with sharp rifling. The buttstock is solid and the forearm is a replacement to fit the later barrel. Hand checkered wrist. The front sight ramp was also filed by hand to have the serrations on the ramp.