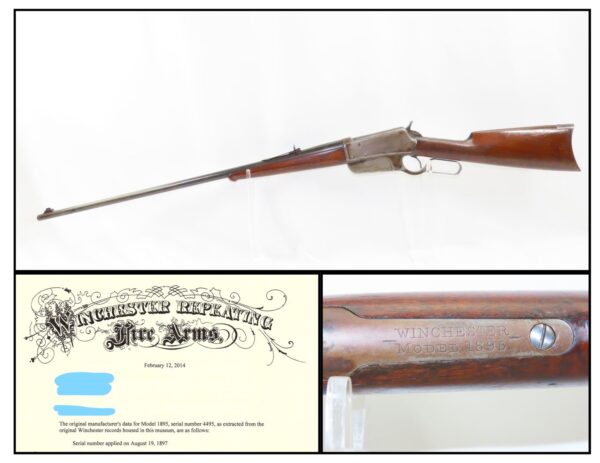 Here we present an antique Winchester Model 1895 Flat Side Lever Action Rifle, manufactured in 1897 in New Haven, Connecticut, and chambered in .30 US, also known as the .30-40 Krag. This one comes with a letter from the Cody Museum confirming with factory records this rifle’s serial application date, ship date, and caliber.

There were 425,881 Model 1895s produced. The serial number on this rifle is 4495. At around serial number 5000, a new receiver profile was introduced which had fluted sides, as opposed to the original flat sided design. This new receiver reduced the weight of the rifle by a small amount and increased the width by 1/16 of an inch. By serial number 6000, it is thought that the last of the flat sided M1895s left the factory. These early rifles are now quite rare.

The Model 1895 rifle in .30 US is most commonly associated today with former President Theodore Roosevelt and the Battle of San Juan Hill in Cuba during the Spanish-American War. However, it was also used by many famed hunters and adventurers, to include Martin and Osa Johnson, Charles Cottar, and author Stewart Edward White. Gerrit Forbes, first cousin of Franklin D. Roosevelt, recommended the M1895 to Theodore Roosevelt who took two M1895 chambered in .405 rifles with him on his 1909 safari to East Africa. Texas & Arizona Rangers are known to have purchased these for duty.

The overall condition is very good. This one wears an old blue refinish. There is an inch and a half long spot of pitting on the bottom of the barrel at the muzzle end. Strong, crisp action. Good, clean bore. This example sports a smooth and solid walnut stock. A very nice Flat Side 1895!