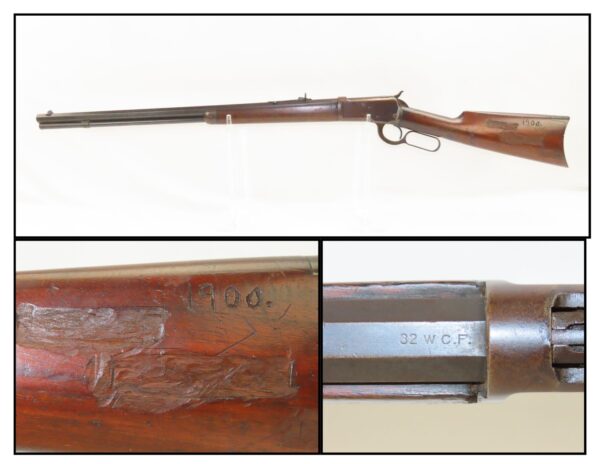 With Some Interesting Period Graffiti!

Here we present an antique Winchester Model 1892 Lever Action Rifle chambered in .32-20 WCF, made in 1896 in New Haven, Connecticut. Another fantastic design from the mind of John Moses Browning, the 1892 was made to replace the venerable and iconic 1873 and featured its pistol caliber chamberings. The result was a trim and light rifle that was an immediate hit and stayed in production for almost 50 years. Many gun owners favored Winchester rifles for their ability to fire the same ammunition as their pistols, meaning that a cowboy, trapper or stagecoach defender could take along his trust rifle and pistol sidearm with only one supply of ammo!

The overall condition is very good. Lovely original blue finish. The action is strong, smooth, and crisp. The bore is in good shape with well-defined rifling. This one has some character to it. The left buttstock has the year date “1900” hand carved. It looks like there used to be more carved in there, probably some sort of name or commemoration that someone shortly after chipped out. All this seems to have been done long ago as there was definitely wear after the deletion and the colors have matured evenly. The stock is solid to the frame despite the bit of shallow fraying on the right side of the wrist. One can only guess at its history!