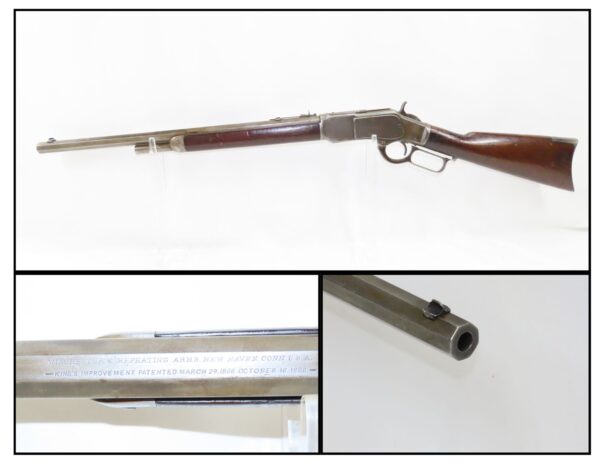 Here we present an antique Winchester 1873 Lever Action Short Rifle in .38-40 WCF, made in 1890 in New Haven, Connecticut. The Model 1873 is one of the most iconic of American rifles. Given the moniker “The Gun that Won the West”, the 1873 was there during the Indian Wars and Range Wars of the late 19th century. Cowboys, Natives, settlers, miners, law enforcement, express companies and hunters all found these rifles and carbines useful tools. These rifles made excellent companions to revolvers at the time as they were chambered for the same ammunition, meaning that the user only had to keep one type to feed both guns. One could easily defend the homestead and provide for his family with this versatile weapon.

This one features a shortened octagonal barrel and magazine tube. This modification was likely intended to make the rifle handier, though it also could have been necessitated by some kind of damage to the barrel or magazine tube. The front and rear sights have been replaced by Marbles sights. The original rear sight dovetail has been filled and blends with the barrel quite well. The new rear sight got a new dovetail and 4 even lines scored at the front. The right side of the forearm has six notches cut into it. The left side of the wrist has been spliced long ago. The letter “B” is stamped into the bottom of the receiver.

The overall condition is good. Strong, crisp action. Good bore for the age. The walnut stock is solid throughout with the noted repair. The top receiver tang is cracked around the screw but remains stable. An interesting old Winchester 1873 that has some modifications and shows lots of use.