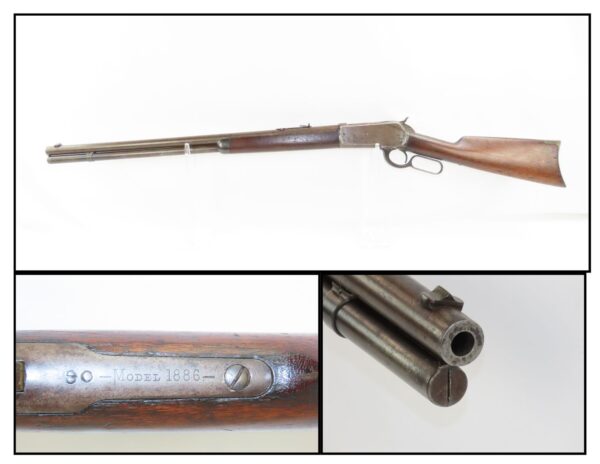 Here we present a Winchester Model 1886 Lever Action Rifle, made in 1888 in New Haven, Connecticut. The 1886 was a collaboration between John Moses Browning and his brother, Matthew Sandifer Browning, to build a big game rifle to replace the Model 1876. This was Browning’s first repeating rifle design adopted by Winchester. The 1886 rifle, often called “the best rifle in the world”, even made Theodore Roosevelt, later President of the United States, very fond of the large caliber Model 1886 working rifle during his western adventures on the plains. From 1886 through 1935, almost 160,000 carbines and rifles were produced with calibers that ranged from the smaller 33WCF to the largest, 50-100, with the most popular caliber being the .45-70 and the 45-90. This rifle was a great improvement over the Model 1876. Its shorter, streamlined frame proved very popular and was well received by sportsmen, shooters, and law enforcement groups alike. The Model 1886 continued the trend towards chambering heavier rounds and had an all-new and considerably stronger locking-block action than the toggle-link Model 1876.

The overall condition is very good. The blue finish and case colors have given way through the years to an aged gray patina. The action is strong and crisp. The bore is in very good shape with nice rifling and slight frosting in the grooves. All the markings are clear and legible. Here is a solid example from a solid company, Winchester!