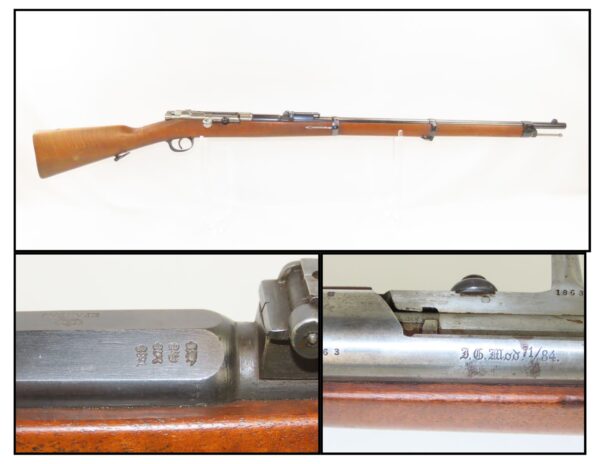 Here we present an antique Mauser Gewehr Model 71/84 Bolt Action Rifle made at the Spandau Arsenal in Western Berlin circa 1888. The Mauser Model 1871 adopted as the Gewehr 71 or Infanterie-Gewehr 71, or “Infantry Rifle 71” was the first rifle model in a line designed and manufactured by Paul Mauser and Wilhelm Mauser of the Mauser company and later mass-produced, as was this rifle, at the Spandau Arsenal.

Paul Mauser developed the single shot bolt-action rifle from 1867 to 1871. The Mauser was provisionally adopted on 2 December 1871, pending the development of an appropriate safety. With support from the government’s Spandau arsenal, the improvements to the safety mechanism were completed and the rifle was formally accepted on 14 February 1872 as Infantry Rifle Model 1871 by the German Empire. The rifles were issued to the German Army from late 1873 to 1875, with approximately 1.82 million rifles and 80,000–100,000 carbines produced. After troop trials in 1882 and 1883, the design was updated in 1884 with an 8-round tubular magazine designed by Alfred von Kropatschek, making this the German Army’s first repeating rifle. This version was designated the Gewehr 1871/84, of which over a million examples were produced.

The overall condition is very fine. Very nice blued finish. The action is strong and tight. The bore is bright with sharp rifling. All marks are legible and clear. All numbers match, and this example is “1888” dated. “G.R.S.” is stamped on the butt plate tang. Here is a historic rifle for your collection!