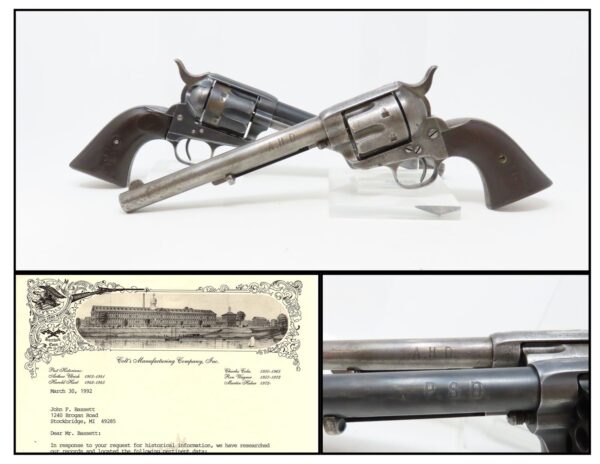 Both Guns from a Shipment of 2! Very Rare

Here we present an antique Pair of Inscribed Black Powder Frame Colt Single Action Army Revolvers. The factory letters state that these are 2 of 2 guns shipped to Arthur H. Douglas on Sept. 7, 1887 as part of a two-gun shipment. Douglas’ initials “A.H.D.” are inscribed on the left side of the barrel on one, and the initials “P.S.D.” on the other. The owner of these revolvers is said to have been a mine owner in the West, specifically Arthur H. Douglas formerly of Duluth, Minnesota, and there is quite a bit of documentation that will come with these revolvers. The Yuma, Arizona Territory newspaper The Arizona Sentinel is filled with his name, and the names of who we think were his brothers or other near relation: Howard H. Douglas and Walter Douglas. All were involved in the mining business and Howard (also seen in the old print as “H.H. Douglas” or “Douglass”) also ran the local Yuma and Ehrenberg Stage Line. The story picks up in Arizona in August 1881 when Arthur (also seen in the old print as “A.H. Douglas” or “Douglass”) advertises for work in mining assessment. He quickly became involved in the Poorman’s Mining District. In September of 1881, he described in his own words the status of several mines in the district: the Amelia, Paymaster, Dividend, Luz, and Garfield. By late 1882 he announced his bid for the local assembly. He was beaten by J.W. Dorrington, owner of the Arizona Sentinel as well as United States Court Commissioner for that locale. However, it seems that since he ran for this elected position while still holding his other office, he immediately resigned and there was a call for Douglas to be installed instead in January 1883.

Then, from Halloween 1887, we find this comment in the St. Paul Daily Globe: “Arthur H. Douglas, who left Duluth about nine years ago, aged about eighteen years [putting his date of birth c1860], has returned here for a brief visit with his parents. He is now a sturdy, prosperous and energetic young man, owner of several producing mines in New Mexico; also two or three stamp mills.” We have not been able to find reference to Arthur having owned mines in New Mexico; rather, we believe that the Globe was mistaken in its information [neighboring New Mexico & Arizona would become states in January & February 1912 respectively]. We were able to confirm that this is indeed the same Arthur Douglas as, back in Yuma on 14 January 1888, the AZS notes that he and his wife [first mention we found of her] just returned the month prior from their trip to Minnesota. So, when we consider the Colt letter that accompanies these revolvers, they were shipped just prior to his & his wife’s journey to Minnesota. In April of 1888, he resigned his position at the Paymaster mine and he and his wife leave town again for parts unknown. The story does not pick back up until 1897, when Arthur and his brother Howard open “a number of claims that bid fair to attract great attention for their riches and size” as well as a five-stamp mill reported the Los Angeles Evening Express in May of that year. Another gap and then in 1908 we see that Arthur is still in the mining business, this time as President of the Rawhide Wonder King Combination Mining and Leasing Company.

To the revolvers: they are both part of the same shipment, in the same configuration with 7-1/2” barrels in .38-40 WCF, hard rubber grips, blued finish. They are only 10 numbers apart. Both feature engraved initials on the left side of each barrel. The style is the same with a 3D type font and shaded foreground. The initials “A.H.D.” conveniently align with Arthur H. Douglas. “P.S.D.” is a bit more mysterious. It may have been a relation such as his wife, as he does appear to marry around this time, but we were not able to find reference to her name. She is referred to either as his wife or “Mrs. A.H. Douglas”. One other possibility is that it stands for Poorman’s Silver District. It may yet come to light! It is rather incredible to have these two Colts reunited after many years. This is quite a rare opportunity!

The overall condition is very good for each piece. The “AHD” gun has its original gray patina, while the “PSD” gun wears an old refinish. Both guns have trademarked hard rubber grips with wear from use. Actions remain strong. Nice bores with good rifling. Numbers match. This is a fantastic set of guns.