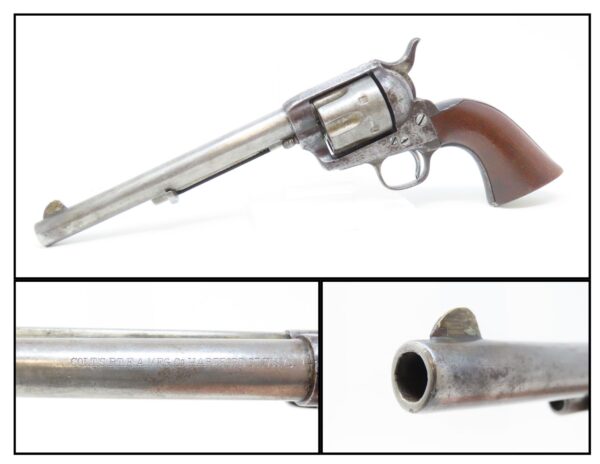 Here we present an antique Colt Frontier Six-Shooter Revolver in .44-40 WCF, manufactured in 1882 in Hartford, Connecticut. The Colt Frontier, or Frontier Six-Shooter was Colt’s 1873 “Model P” type revolver manufactured in .44-40 Winchester caliber instead of .45 so that it was compatible with Winchester’s Model 1873 ammunition. Production began in 1877. “Colt Frontier Six-Shooter” was the actual name of the Colt pistol model, and this was acid-etched on the left side of the barrel. After 1889, the legend was roll-stamped until 1919, when the caliber designation “.44-40” was added. These revolvers made excellent companions to rifles at the time as they were chambered for the same ammunition, meaning that the user only had to keep one type to feed both guns.

The overall condition is good. It bears traces of a very old nickel finish. The action (hammer/trigger) are strong. The cylinder timing is a bit intermittent, sometimes hitting the next chamber and locking up and sometimes overshooting it. The walnut grip is a replacement and it is slightly shy to the grip frame. The bore is dim with good rifling. The front sight is an old replacement.