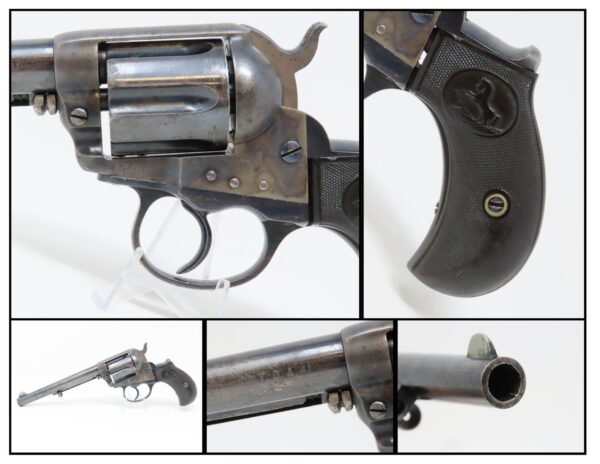 Hartford, Connecticut Made Double Action Revolver Made in 1881

Here we present an Antique Colt M1877 “Thunderer” Revolver with an etched panel barrel, manufactured circa 1881. The Model 1877 was offered in three different calibers, which led to the three unofficial names. The “Lightning” which was chambered in .38 Long Colt. The “Thunderer” which was chambered in .41 Colt. And, the “Rainmaker” which was chambered in .32 Colt. Neither “Lightning” nor “Thunderer” were Colt designations, and were not used by the factory in any reference materials. Both terms were coined by Benjamin Kittredge, one of Colt’s major distributors. Kittredge was responsible for the term “Peacemaker” for the Colt Single Action Army. The 1877 “Thunderer” in .41 caliber was the preferred weapon of Billy the Kid and was his weapon of choice when he was killed by Pat Garrett in 1881.

The overall condition is fine. Great blue finish on the barrel, grip frame, and cylinder with accents on the back of the hammer and trigger. Still vivid case colors on the frame. The action is strong and tight and functions well in both double and single action. The bore is bright with sharp rifling. The numbers match. The cylinder arbor pin and the grips are replacements with the latter fitting a little shy to the frame. This is a really nicely preserved Colt Thunderer with a great action and lots of finish.